Federal Aviation Administration spokesman Ian Gregor told CNN in an email that a Cessna 305A took off about 9:15 a.m. local time from Dillingham Airfield, crashed for unknown reasons and came to rest upside down.

The FAA and the National Transportation Safety Board are investigating, Gregor said. Hawaii Department of Transportation spokesman Tim Sakahara told CNN affiliate KITV that the lead NTSB investigator is expected to arrive Sunday.

Bill Star, the vice president and general manager of Honolulu Soaring, a flight school, told CNN that two men were “getting familiar with the airplane” during a flight at the airfield when the plane crashed.

Star said the men were an instructor and a pilot who had “lots of experience” with different types of aircraft.

Star says they are “trying to figure out what went wrong.” The plane’s tail number, provided by the Hawaii Department of Transportation in a tweet, is registered to Honolulu Soaring.

A fatal crash occurred at the airfield less than a year ago. 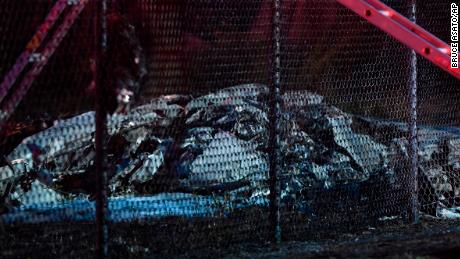 Eleven people were killed June 21 when a Beechcraft BE65 twin-engine plane carrying a group on a skydiving expedition crashed during takeoff.
Dillingham Airfield, located about 35 miles northwest of Honolulu, is a general aviation airport operated by the Hawaii DOT under a five-year lease from the Army, according to the Hawaii Airports website. The Army also uses the airport.

Dillingham Airfield will be closed until further notice, Sakahara said.