In a short video posted on Twitter, a red vehicle can be seen speeding down a road with at least two people — one holding onto the driver’s side of the car and another person on the hood of the car.

Rodney Root, who captured video of the incident, said in an interview with CNN, “This was right after the Black Lives Matter protest had broken up. There was a man attempting to hold traffic with an electric scooter and the passenger of the car got out, slammed the scooter to the ground and got back in … A lady ran up to confront the car and the car struck her and sped off at full speed. I was so shocked I started chasing and stopped the video.” 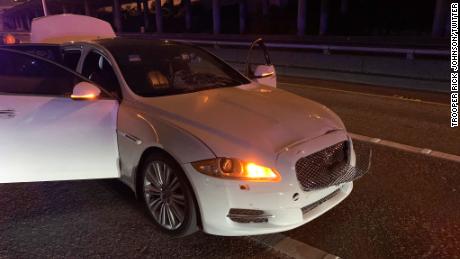 During a live stream, CNN affiliate WRTV showed a woman being loaded into an ambulance. It is unknown the severity or extent of the woman’s injuries.
The Bloomington mayor’s office told CNN “the investigation is ongoing and we don’t have enough information to make a statement yet.”

WRTV spoke to Geoff Stewart, the man who was holding on to the side of the car.

“A woman driving the vehicle came up to the stop and had started revving her engine toward us and we tried to stop her and let her know that the crowd is clearing up just wait a second. But, she and her passenger both wanted to go right away — so, they started to push, they pushed into the woman that was with me and when she pushed again both of us went on the vehicle,” Stewart said in an interview with WRTV.

Stewart continued, “I was just trying to block her vision so she would slow down. So I tried to pull myself as far in her way to kind of obstruct her view. She drove through red lights and made her turn up here that threw both of us off the car.”

CNN is working to get more details from the Bloomington Police Department and the mayor’s office.

CNN’s Rebekah Riess and Amanda Jackson contributed to this report.