A petite Saw-whet owl that had hitched a ride inside the soon-to-be Christmas tree when it was cut down in Oneonta, New York, this week.

The owl, nicknamed “Rockefeller,” is recovering at a wildlife facility about two hours from 30 Rock.

Rockefeller was discovered during tree transport, according to Ravensbeard Wildlife Center. The wife of an employee for the company that gets the tree to Manhattan called the center to report a “baby owl” in need of help. 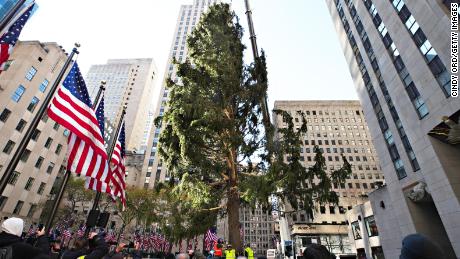 But Rockefeller is no baby. Saw-whet owls are the smallest species of owl in the region — about the size of a soda can, according to Cornell University’s Lab of Ornithology.

Losing his home while he was in it was relatively distressing for Rockefeller, so since arriving at Ravensbeard on Tuesday, he’s been gorging on mice and catching up on some much-needed R&R.

“So far so good,” the center wrote on Facebook. “His eyes are bright and seems relatively in good condition with all he’s been through.”

When he’s ready to fly again, Rockefeller will be released on the grounds of Ravensbeard, the center said, where he’ll have acres of trees in which to make a new home. Saw-whet owls are migratory, which makes them quite capable of adapting to new places.

As for the withered tree, it still needs to be lit, decorated and spruced up before its debut on December 2, Rockefeller Center said. And if it was good enough for the bird, it should make a fine Christmas tree, too.
Original Source