In the call, Walker tells the 911 operator, “Somebody kicked in the door and shot my girlfriend,” and that Taylor was unresponsive on the ground.

Taylor was shot at least eight times in March when three officers entered her Kentucky apartment by force to serve a search warrant in a narcotics investigation. The department said the officers announced themselves and returned Walker’s gunfire. 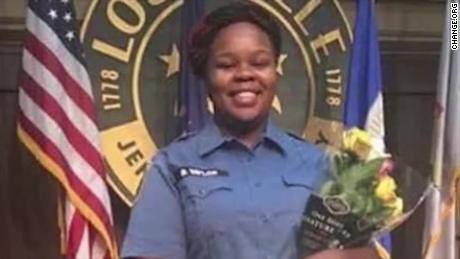 Walker was charged with attempted murder of a police officer and first-degree assault, but prosecutors filed a motion last week to drop the charges. In a wrongful death lawsuit, Taylor’s mother said the officers didn’t knock at all.

“This call is one of the hardest things I’ve ever listened to,” attorney Sam Aguiar said in a statement Thursday. “Kenneth Walker is a great man. He stayed by Breonna’s side. He lost the love of his life and then went to jail after doing everything right. He had no idea who had broken into the home and fired shots. My heart is bleeding for him and his family.”

The FBI has opened an investigation into the incident, and the Louisville Metro Police Department said it would require sworn officers to wear body cameras.

Protestors have gathered this week to call for justice for Taylor.

What started as peaceful protests on Thursday escalated to property damage, according to a news conference from the Louisville Metro Police Department. The department then reported Thursday night that seven people were shot downtown during the protests, according to CNN affiliate WDRB.

“Understandably, emotions are high. As Breonna’s mother says, let’s be peaceful as we work toward truth and justice,” Louisville Mayor Greg Fischer said on Facebook.