Latest News
Home /Azerbaijan and Armenia agree to a pause in fighting
The new agreement — set to start at midnight local time (4 p.m. ET Saturday) — was announced after both sides earlier in the day accused each other of attacks that violated the Moscow-brokered, week-old peace deal.

The dispute dates to the collapse of the Soviet Union, when Nagorno Karabakh declared independence from Azerbaijan, sparking a violent conflict that ended in a shaky 1994 ceasefire.

Armenia backed Nagorno Karabakh, which established a de facto independence that is not recognized by most of the world. Though it sits within Azerbaijani territory, the region is populated and controlled by ethnic Armenians.

Armenia has said the current flare-up is between Karabakh and Azerbaijan.

Russian Foreign Minister Sergey Lavrov talked to his Azerbaijani and Armenian counterparts on the phone Saturday to emphasized the need for the truce to hold, according to Russia’s Foreign Ministry.

Arayik Harutyunyan, leader of the contested region, welcomed the new peace effort, saying in a statement, “The Republic of Artsakh confirms readiness to observe the humanitarian truce on a reciprocal basis,” in line with the ceasefire agreements brokered by Moscow on Saturday and one week ago.

Before the latest ceasefire attempt Saturday, Azerbaijan accused Armenia of a rocket attack against its second-largest city, Ganja, killing at least 13 civilians — including three children — and wounding more than 50 others. 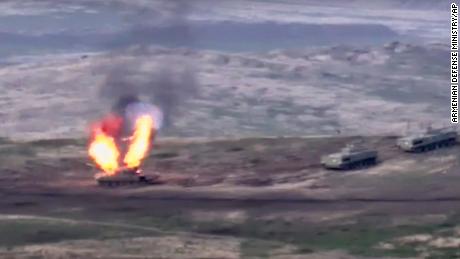 Azerbaijan President Ilham Aliyev called the missile strike a “cowardly shelling” that “cannot break the will of the Azerbaijani people.”

The attack occurred in the early hours of Saturday morning and targeted civilian quarters in the central part of the city, according to a statement from the Azerbaijani prosecutor’s office.

Azerbaijani presidential adviser Hikmet Hajiyev accused Armenia of using ballistic missiles in the attack and said authorities had evidence to support the claim, according to a Twitter post. 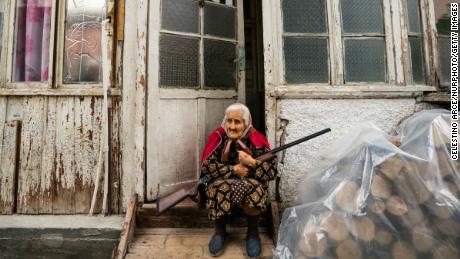 Video and photos purportedly from the scene showed rescue workers clearing rubble to reach survivors. The prosecutor’s office said officials were compiling a complete list of the victims.

Last weekend, another temporary ceasefire fell apart after weeks of fighting, with the two countries trading accusations of violating the agreement amid reports of casualties.

France has demanded “an immediate end to hostilities” since fighting broke out between the countries on the morning of September 27.

The short lived ceasefire last week came after UN High Commissioner for Human Rights Michelle Bachelet spoke of the suffering the conflict was inflicting on civilians.

The dispute over Nagorno-Karabakh has run hot and cold since the 1994 ceasefire.

The region lies within Azerbaijani territory, connected to Armenia proper by a costly highway. It is heavily militarized and its forces have been backed by Armenia, which has a security alliance with Russia.

Tensions have risen since July, when several days of clashes rocked the border between Armenia and Azerbaijan.