Biden rode into the White House last year on a record that spanned nearly 50 years in public service. And while the President ran as an antidote to then-President Donald Trump, Johnson has often been compared to the 45th President for his populist message and often brash comments. The similarities between Trump and Johnson aren’t lost on Biden, who on the 2020 campaign trail once called Johnson a “physical and emotional clone” of Trump.

Given the tight ties between the US and UK, observers expect the public portions of the meeting to be cordial and warm. But both men enter this weekend’s diplomatic gathering under pressure to define their respective roles in the world and amongst other global powers.

The official previews of their meeting have been straightforward. The White House has indicated Biden will touch on a number of issues during his engagements with Johnson, including the coronavirus pandemic, climate change, financing global infrastructure in the developing world, maintaining a diplomatic presence in Afghanistan and other issues related to the Indo-Pacific and the Middle East. The UK government has relayed that Johnson, the host of the G7 summit, will focus on ways for the world to “build back better from coronavirus” and tackling climate change.

But their meeting on Thursday also comes at a time of tension over Northern Ireland’s role in the UK’s Brexit agreement with the European Union, which is a key issue for Biden. The meeting will set the tone for both US-UK relations over the next four years and Biden’s diplomatic agenda as they confer in southwest England. It also kicks off Biden’s swing across Europe for meetings with America’s G7 partners, NATO allies, the European Union and, finally, Russian President Vladimir Putin.

Biden plans to press Johnson on Northern Ireland during their first face-to-face meeting on Thursday, according to senior administration officials. It’s an issue he feels very strongly about, officials said. He has watched with trepidation as Brexit has caused new questions about the durability of the Good Friday Agreement, which ended the violent conflict in Northern Ireland by bringing unionists and Irish republicans into a power-sharing government, and peace in the region.

But the President isn’t planning to adopt a confrontational tone with Johnson on the Northern Ireland issue during their meeting later Thursday, a senior administration official said, instead raising it as a topic of deep personal interest that he wants to see resolved.

“It will not be confrontational or adversarial,” the official said of Biden’s plans to raise the matter in his talks with Johnson. “He didn’t come here to give a lecture. He came merely to communicate what he believes, very, very deeply about peace in Northern Ireland.”

Biden has raised the issue with Johnson in telephone calls ahead of the summit, and diplomats have discussed the matter with British counterparts in the lead-up to the two leaders’ bilateral talks. But officials denied a report in British newspaper The Times that American diplomats held heated conversations with UK officials on the matter ahead of the summit, including issuing a formal reprimand, saying the discussions on the matter have not been “heightened.”

Questions still remain about what the long-term future of the US-UK relationship will look like and whether it will be superseded by America’s relationships with other allies in the west. European allies — reeling from Trump’s America First-style diplomacy — are also still not clear if Biden’s effort to bring American diplomacy back will result in a return to the status quo or result in something new. They’re also not sure how long Biden’s style of diplomacy will last, given that Trump might run for reelection.

“I think to me the defining question is how both sides use the next three and a half years, and if it’s sort of a transformative period, or if it’s more of a return to the status quo pre-Trump,” said Thomas Wright, the director of the Center on the United States and Europe at the Brookings Institution. “I don’t think we’re going to get an answer to that at this summit, but I think that’s sort of the defining choice that’s out there.” 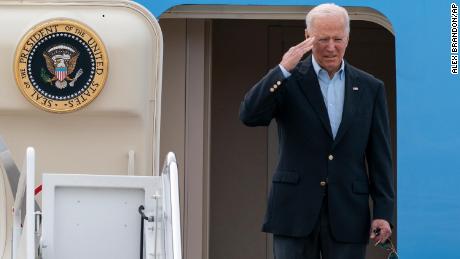 Biden and Johnson’s relationship will no doubt be one to watch throughout Biden’s swing through Europe as he looks to reassure US allies that America will once again be conventional and reliable on the world stage.

The two diverge on policy on several fronts, including Biden’s opposition to Brexit and Northern Ireland’s role as part of the Britain’s exit from the European Union. The part of the Brexit deal that creates a de facto trade border in the Irish Sea, the Northern Ireland Protocol, has contributed to rising tensions in the region this year. Biden has long been skeptical of Brexit, and holds deep affection for Ireland, his ancestral homeland. In his first speech in the United Kingdom on Wednesday, he quoted a line from Yeats.

National security adviser Jake Sullivan said on Wednesday that Biden is expected to bring up Northern Ireland during his meeting with Johnson, but told reporters his comments would be reserved to making “statements of principle.”

“He’s not issuing threats or ultimatums. He’s going to simply convey his deep-seated belief that we need to stand behind and protect this protocol,” Sullivan said.

The two men also hold different views on immigration and foreign aid, which Johnson has opted to slash.

A global minimum tax agreement among the G7’s finance ministers kicked off the summit week on past weekend — marking an early win for the Biden administration ahead of the President’s arrival. But even before Air Force One’s wheels touched down on the tarmac in England, UK Finance Minister Rishi Sunak indicated that he was pushing for a carveout for the city of London in the agreement — marking another potential rift in relations.

Some of the differences are more visceral.

In an op-ed while serving as London’s mayor, Johnson insulted then-President Barack Obama’s Kenyan heritage as part of a discussion about the President’s opposition to Brexit. Biden, of course, was serving alongside Obama at the time as vice president. And there is, of course, Biden’s crack about Johnson’s resemblance to Trump.

Charles Kupchan, a former senior director for European affairs at the White House National Security Council during the Obama administration, told CNN much of the discussion between Johnson and Biden in front of cameras is expected to be cordial.

“Biden is going to Europe as a rock star of sorts. Europeans are delighted that he’s in and Trump is out. And as a consequence, I think this will be a week of smiles and back slapping and good atmospherics. So I don’t expect to see any differences between Biden and Johnson emerge in public-facing events,” Kuphan, now a senior fellow at the Council on Foreign Relations, said. 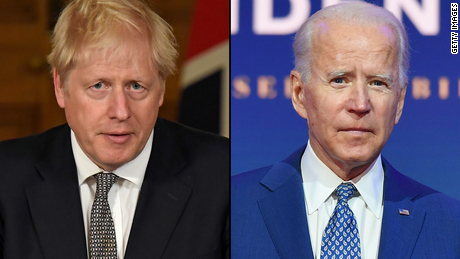 The so-called “special relationship” between the heads of the US and the UK, one of America’s strongest allies, has played a key role in the countries’ public diplomacy. The term was coined by Prime Minister Winston Churchill after World War II to describe the UK-US relationship, and it’s often used to illustrate the warm personal dynamic between leaders of the two countries.

But as the UK tries to forge its own path through Brexit, Johnson has expressed his distaste for the term publicly and, reportedly, with the President.

The Atlantic reported this week that in an early call with Biden, Johnson told the President he disliked the phrase “special relationship” when Biden used it because it seemed needy and weak.

But the White House and senior-level staff have continued to use the term following The Atlantic’s report, including in press briefings.

A recent schedule sent to the press also described the upcoming bilateral as an effort “to affirm the enduring strength of the special relationship between the United States and the United Kingdom.”

Downing Street has not confirmed that the Prime Minister made the comment on the call with Biden, but reiterated that Johnson “is on the record previously saying he prefers not to use the phrase, but that in no way detracts from the importance with which we regard our relationship with the US, our closest ally.”

Interactions between two leaders during their meeting could set the tone for the relationship’s future, said Leslie Vinjamuri, the director of the US and the Americas program at Chatham House, an independent policy institute.

“This is an opportunity for Johnson and Biden to kind of show a different face than they’ve showed in the past through their exchanges. And it’s the first one, so it matters a lot,” Vinjamuri said.

“You know that … first impression for the public, I think, is really going to be so significant in terms of trying to move past what hasn’t been the best for years,” she added. 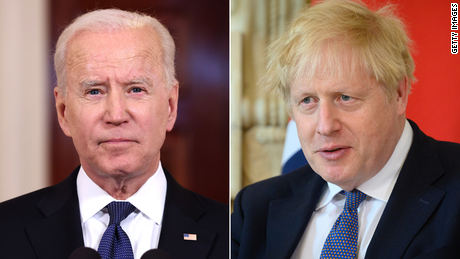 Despite the frequent comparisons to Trump, Johnson sometimes kept the former President at arm’s length.

When Trump came to the UK in 2019 for his state visit, Johnson declined to meet with him in person. The visit happened during the Conservative Party leadership contest, and numerous sources involved in the campaign told CNN at the time that it might not be in Johnson’s best interest to be seen with the then-President.
Johnson said Trump was “completely wrong” to encourage a mob to storm the Capitol building in Washington. He was also one of the first world leaders to congratulate Biden on his presidential win last November, despite Trump’s refusal to concede the election.

Johnson and Biden are both expected to push to make progress with other leaders on climate. The two men worked together when Biden hosted a virtual climate summit, which was meant to act as a precursor to Johnson’s climate event, COP26, set for the fall.

And this week the Biden administration will announce purchasing 500 million additional Pfizer vaccine doses to distribute to other countries — in line with Johnson’s call for G7 leaders to vaccinate the world against Covid-19 by 2022.

Biden has underscored that strengthening American alliances will be an overarching theme of his Europe trip. And Sullivan told reporters that the trip at its core will “advance the fundamental thrust of Joe Biden’s foreign policy, to rally the world’s democracies to tackle the great challenges of our time.”

During their meeting, the President and the prime minister are expected to sign onto a range of agreements.

Biden and Johnson are expected to agree to a new Atlantic Charter modeled on the historic declaration made by Roosevelt and Churchill in 1941 that set out American and British goals for the world after the end of World War II, according to the White House and 10 Downing Street.

The new Atlantic Charter that Biden and Johnson will sign on Thursday is meant to reflect the shifting threats facing the world eighty years after the original document was signed following World War II.

“It’s been 80 years since the last one, it’s about time that it gets refreshed,” a senior administration official said ahead of the signing.

Officials said the document was not designed to presage a new Cold War, as the original Atlantic Charter ended up doing.

The leaders will also commit to working to open up travel between the US and the UK and lifting restrictions that were put in place to stop the spread of Covid-19.

Sullivan said Wednesday the US has established two working groups of public health experts — one with the United Kingdom and one with the European Union.

“The point of these working groups is to share data and set out both milestones and criteria to enable a reopening of travel between our two countries as swiftly as possible, consistent with public health guidance,” Sullivan told reporters aboard Air Force One.

In addition, Biden and Johnson are expected to agree to pursue a bilateral technology agreement that will be signed next year, according to a source familiar with the matter.