The road to hell: California highway is closed and two firefighters are injured as wildfire threatens traffic

By Associated Press and Alastair Talbot For Dailymail.Com

California highway authorities were forced to close all lanes of Interstate 5 in Southern California as firefighters battled a wildfire just 40 miles northwest of Los Angeles.

The fire broke out Saturday afternoon in mountainous terrain near Castaic in northern Los Angeles County at 5pm and grew to 450 acres – more than half a square mile – prompting the California Highway Patrol to close a stretch of the busy freeway.

Two firefighters sustained burn injuries tackling the blaze, but details about their conditions were not immediately available. Both were transported for treatment.

The fire remained completely uncontained, but firefighters were making ‘good progress’ with the help of water-dropping helicopters and an aggressive ground attack, the U.S. Forest Service said at 7pm.

Shortly after 9pm, the CHP reopened two lanes of the freeway in each direction while deputies in the Sheriff’s Santa Clarita Valley station reported that the threat to structures appeared to have been ‘mitigated.’

The highway was eventually reopened on Sunday as the blaze moved on. 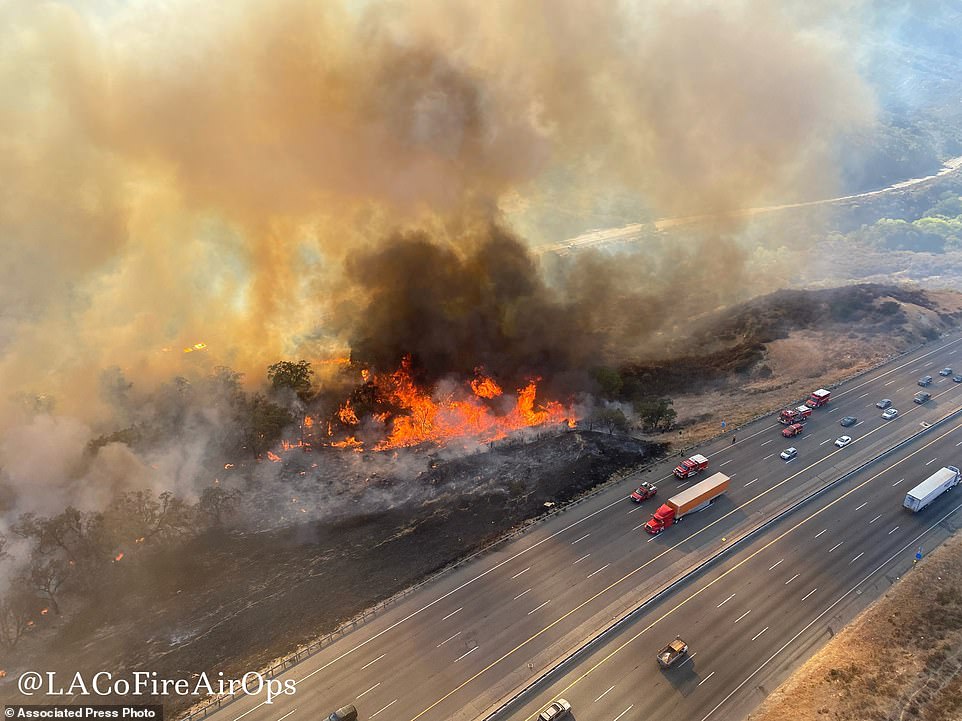 This aerial picture shows the wildfire burning off Interstate 5, just north of Castaic on Saturday, prompting the California Highway Patrol to close a stretch of the busy freeway 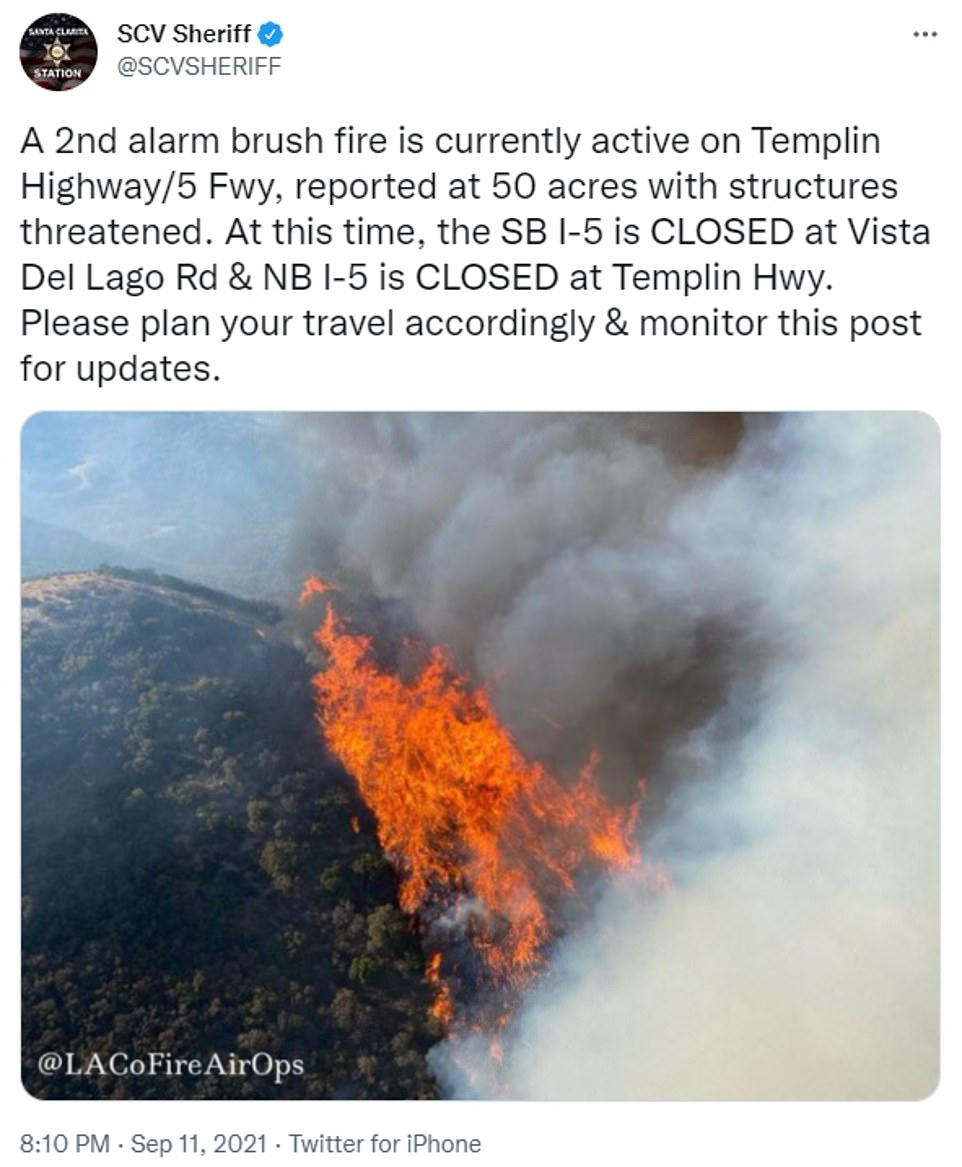 The Santa Clarita Valley Sheriff’s station tweeted updates on the fire at 5p.m. local time yesterday when it was seen and reported by the U.S. Forest Service

The wildfire happened next to Castaic, an unincorporated community that’s 40-miles northwest of Los Angeles 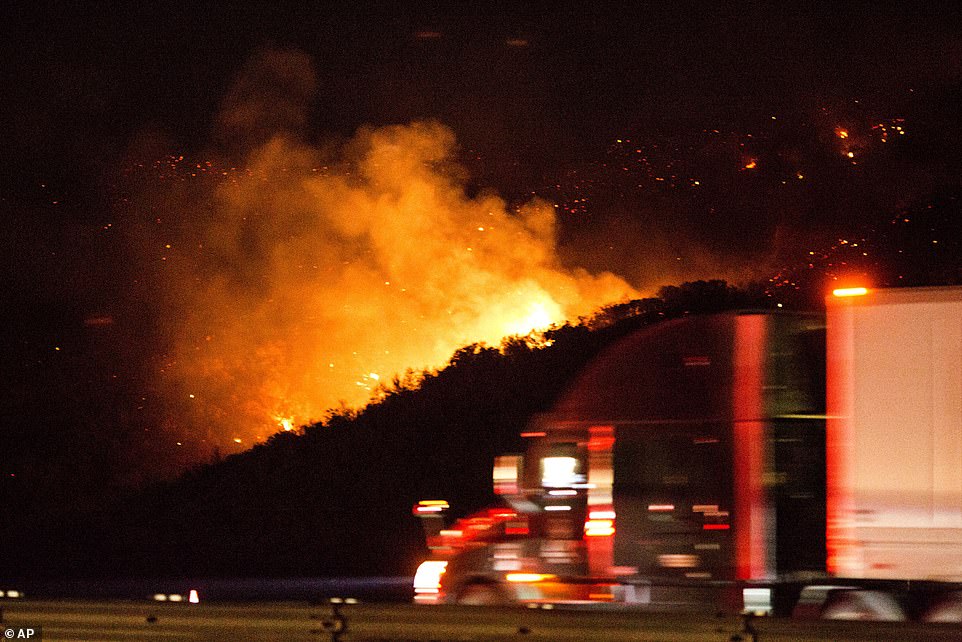 A vehicle passed by the burning Route fire, a brush wildfire off Interstate 5 north of Castaic, Calif on Saturday. The wildfire near Castaic Saturday has led to the closure of a part of the major freeway in Southern California, officials told local media.

Details about how the fire started were not immediately available.

Meanwhile, most residents of a Northern California mountain town devastated by the huge Caldor Fire south of Lake Tahoe will be allowed back Sunday to inspect the damage.

Most of Grizzly Flat’s homes, as well as the school, post office, church and fire station were destroyed in the first days of the fire.

Firefighters were diverted from battling the 342-square-mile wildfire to fight multiple overnight lightning fires when thunderstorms swept across the state Thursday night into Friday. 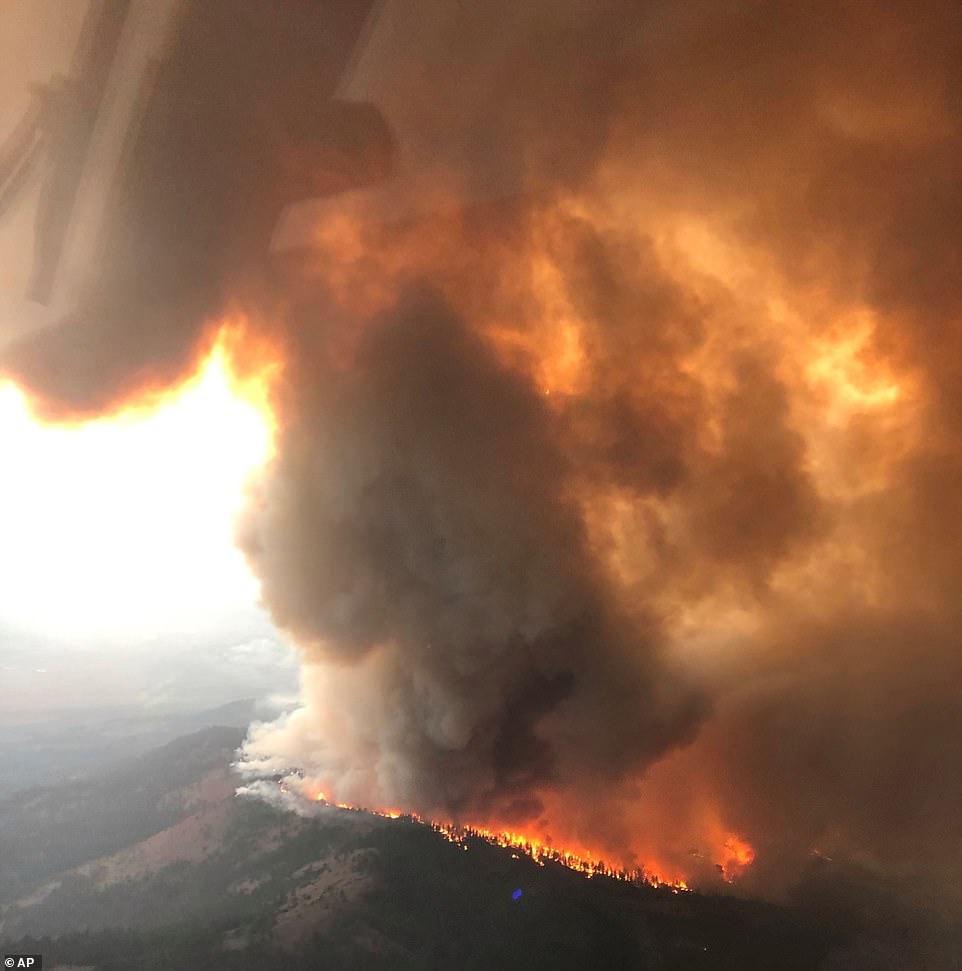 This aerial photo taken on Saturday was provided by the U.S. Forest Service Lassen National Forest and shows the Great Basin Team 1 Air Attack operations on the Dixie Fire on the Horton Ridge in Plumas County 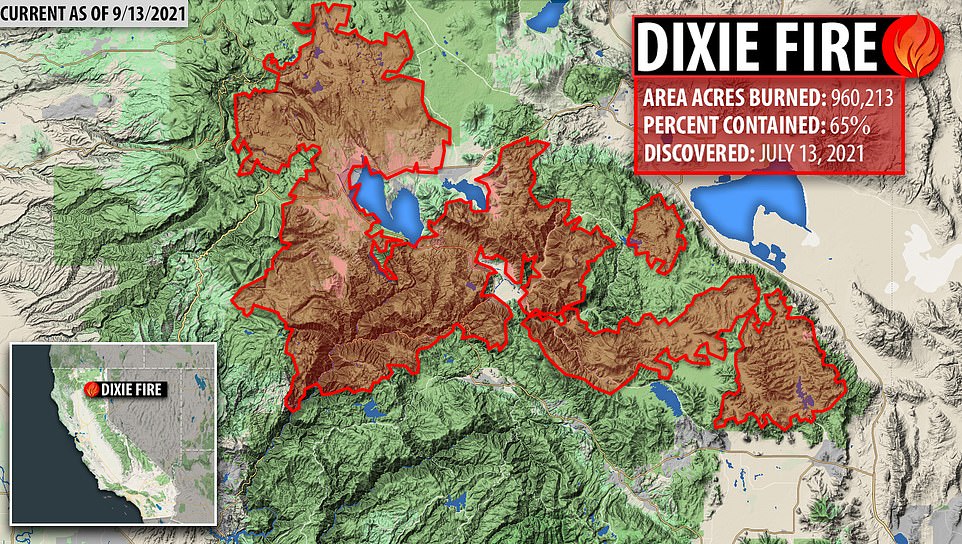 Thousands of people were under evacuation orders in July as the Dixie Fire blossomed to burn down nearly 900,00 acres. It is currently 59 percent contained and has destroyed at least 400 structures 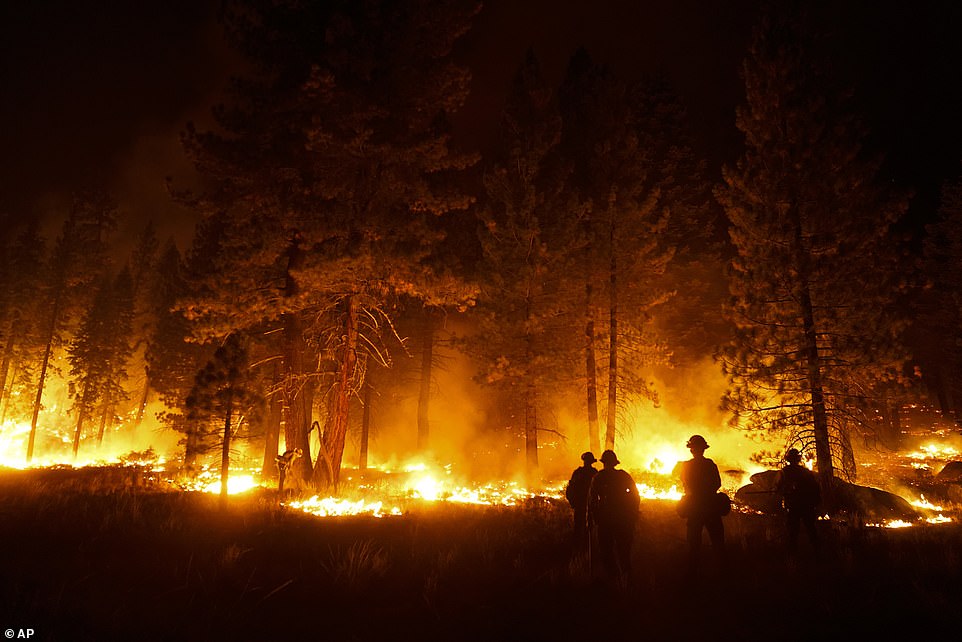 A firefighter lights a backfire to stop the Caldor Fire from spreading near South Lake Tahoe, California in a picture taken on September 1 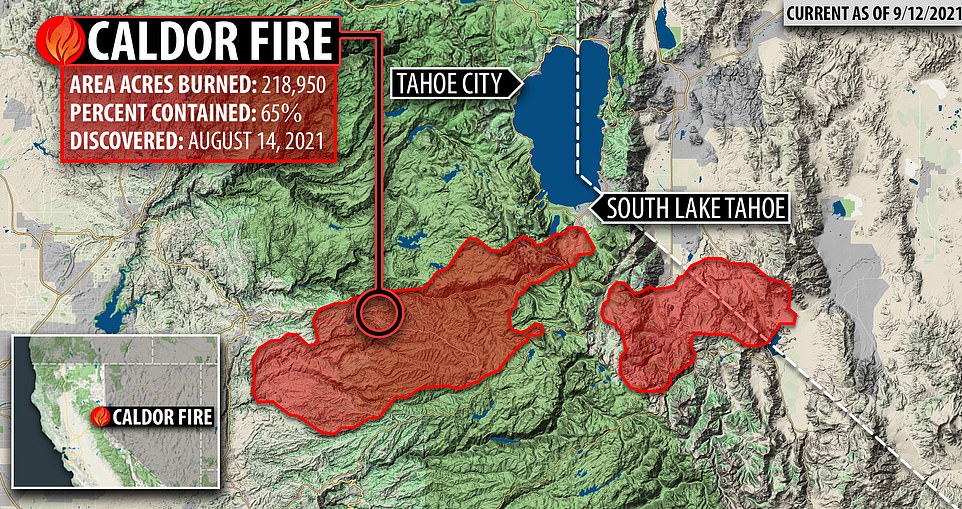 The Caldor Fire is still active and has burned more than 216,000 acres of land, destroying 922 buildings

Up to a half-inch of rain fell on portions of the Dixie Fire, which began in mid-July and has burned through huge swaths of the northern Sierra Nevada and southern Cascades.

However, fire officials said the rain is drying fast and vegetation is becoming more flammable.

The second-largest fire in California history has burned 1,500 square miles (3,885 square kilometers) of land and more than 1,300 homes and other buildings. It was 65 percent contained.

Hot weather conditions were reported in Southern California over the last days of August, prompting authorities to close Angeles National Forest until September 17.

California has already exceeded the acreage burned at this point last year, setting up a new record. Now it’s entering a period when dry weather and high winds raise the risk of new fires.