Latest News
Home /Democratic primary voters trust Biden over Sanders to handle a major crisis, CNN poll finds
About 6 in 10 in Illinois and Arizona said they would trust Biden more in a crisis, while in Florida, that stood higher at about 7 in 10. That mirrors findings from exit polling conducted last week, which found Biden trusted by a wide margin over Sanders among Democratic primary voters in Michigan, Missouri, and Washington.
Arizona, Florida and Illinois moved forward with their presidential primaries on Tuesday, while other states have postponed their elections over concerns about the virus. In Ohio, where a primary was scheduled for Tuesday, Republican Gov. Mike DeWine announced Monday night that polls would be closed because of a health emergency related to the pandemic.
The Centers for Disease Control and Prevention on Sunday recommended that no gatherings with 50 people or more take place for the next eight weeks to slow the spread of the novel coronavirus. The agency said these gatherings include conferences, festivals, parades, concerts, sporting events, weddings and other types of assemblies. Additionally, the White House said Monday that all Americans should avoid groups of more than 10 and advised older people to stay home. 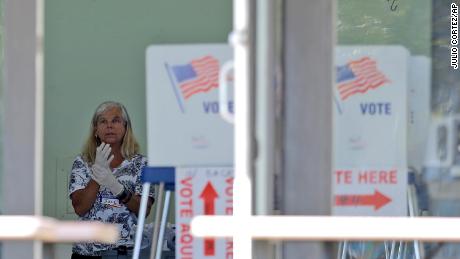 Preliminary findings from a CNN Primary Poll in Illinois found widespread concern about the effects of the coronavirus outbreak, with many worried about the direction of the nation’s economy in the next year.

Electability and the fight against Trump

Voters in the three states hosting elections Tuesday are no different than their predecessors in the Democratic primary race so far on at least one score: Majorities in all three prioritize nominating a candidate who can beat President Donald Trump over one who agrees with them on the issues.

About two-thirds in Arizona and Florida said so, as did about 6 in 10 in Illinois. That’s right about on par with the overall share across all states where exit, entrance or primary polls have been conducted so far.

In Arizona, a state widely expected to be a battleground in November, about 7 in 10 said they are angry about the Trump administration, slightly higher than the roughly two-thirds who said so in Illinois and the 6 in 10 who feel the same way in Florida.

CNN Primary Polls were conducted by Edison Research for the National Election Pool in Arizona, Florida and Illinois. Results are based on telephone polls conducted before election day. The margin of error for results based on the full sample is plus or minus 4 points each state.