Democratic sources tell CNN the party’s legal apparatus is preparing to respond to any potential scenario that arises, whether it’s fighting disputed state counts in court, a state’s slate of electors or the deployment of federal law enforcement officers to states.

In recent weeks, Trump has said he wants to send “law enforcement” officers and “US attorneys” to polling places to guard against alleged voter fraud, a scenario that is legally suspect. Since the death of Justice Ruth Bader Ginsburg, he’s said that his nominee to the Supreme Court needs to be confirmed because the election is likely to go before the high court.

Trump has repeatedly made false claims that mail-in voting is ripe with fraud, and he’s suggested the results of the election should be known on Election Night, something elections experts have said is simply not the case due to the influx of absentee ballots amid the coronavirus pandemic. More of Trump’s votes are likely to be counted first because a greater percentage of Republicans are planning to vote in person rather than by mail.

And last week, Trump refused to agree to a peaceful transition of power after the election should he lose, saying, “We’re going to have to see what happens.”

The Trump campaign has argued its legal efforts are intended to stop Democrats from changing voting rules just before the election. Republicans on Capitol Hill disagreed with Trump’s refusal to agree to a peaceful transition, saying that one will occur once the winner of the election is determined. Many Republicans have argued Trump is just using rhetoric to rile up his critics and the media, dismissing the idea that he would try to stand in the way of a legitimate election result.

“The winner of the November 3rd election will be inaugurated on January 20th. There will be an orderly transition just as there has been every four years since 1792,” Senate Majority Leader Mitch McConnell tweeted the morning after Trump’s comments.

But Democrats are warning their GOP colleagues not to dismiss Trump’s comments — and to stand up to him if he refuses to concede the election.

“We can hope that at the right moment, some of our Republican colleagues will stand up with us and say there’s something more important than the President’s ego, it’s the Constitution and our democracy,” said Sen. Dick Durbin of Illinois, the Senate’s No. 2 Democrat.

Justin Levitt, a Loyola Law School professor who specializes in voting rights law, said the likelihood of a disputed election result fueling a constitutional crisis remained remote, but noted that the expected delay in determining the result due to the counting of mail-in ballots could spark public agitation, even if the process is working correctly.

“It’s their job to prepare for extremely unusual scenarios,” Levitt said of the Biden campaign. “In the period after Election Day, people are going to want the catharsis of an answer, and that may take a minute. So, I’m more worried about our ability to deal with that unresolved tension than any part of the vote counting or tallying process.”

Federal law enforcement and the election

Democrats see numerous potential landmines where Trump could take actions — both through the federal government and his Twitter feed — to undermine the election.

Trump said in an interview with Fox News’ Sean Hannity last month that he was considering sending law enforcement, including federal US attorneys, to polling locations in order to guard against voter fraud.

Trump’s threat to deploy military troops to US cities in response to protests over policing and racial injustice earlier this year — and the deployment of federal officers over local officials’ objections — have sparked concerns he may threaten a similar action ahead of the election, too. 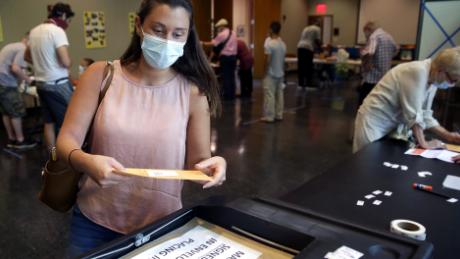 The Justice Department has waded into the election in other ways already. Attorney General William Barr has echoed Trump’s false claims about mail-in voter fraud, and this week he personally briefed Trump about the Justice Department investigating the accidental discarding of nine mail-in ballots in Pennsylvania. People briefed on the matter said investigators are treating the issue as a result of improperly trained staff, not intentional fraud — but Trump and his campaign have seized on the incident to claim fraud and election “rigging” by Democrats.

Sen. Joe Manchin, a West Virginia Democrat, said on CNN’s “State of the Union” Sunday that he wasn’t concerned Trump would try to send the US military to polling places. But he was alarmed at Trump’s claims the election would be stolen from him.

“His words do have meaning, especially to his ardent followers,” Manchin said. “We’re trying to count the votes. We’re trying to figure out who is the winner, and under a pandemic that we have right now, they should understand, but he’s making everyone believe that, ‘Hey, don’t worry, there’s going to be — if we lose this election, it will be stolen from him.’ No, if you lose the election, it’s because the people wanted change.”

Fighting in the courts

Trump has also linked his new Supreme Court nominee, Amy Coney Barrett, and the presidential election. “I think this will end up in the Supreme Court and I think it’s very important that we have nine justices,” he said last week.
The prospect of a newly minted Justice ruling on a case that could decide the election for or against Trump doesn’t sit well with Democrats, and they plan to press Barrett to recuse herself from any potential election dispute that reaches the high court.

“If the President refuses to leave, there will be a court challenge. That’s probably how it’s going to be resolved. He knows that,” Sen. Mazie Hirono, a Hawaii Democrat on the Judiciary Committee, told CNN last week. “That’s another reason he says he wants this nominee to be on the Supreme Court as soon as possible in case he mounts a legal challenge to the election. That’s what’s going to happen.”

ELECTION 2020: Send us your stories about voting issues
It’s not just the possible 2020 equivalent of a “hanging chads” dispute over ballots that concerns Democrats, a scenario both campaigns have amassed massive legal teams to fight.

Democrats are also preparing for more constitutionally fraught scenarios that might arise, such as a state legislature putting forward a competing slate of electors to the Electoral College that goes against a state’s popular vote winner.

It’s something that’s been raised in Pennsylvania, a key swing state, where state Republican officials say there have been “entirely hypothetical” discussions surrounding the possibility the legislature would appoint electors if the vote tally is delayed. They say the discussions were in response to changes to the state’s voting rules pushed by Democrats, denying there’s any suggestion the state would go against the popular vote.

Another potentially legally fraught scenario surrounds an archaic, never-before-tested law known as the Electoral Count Act. The 19th Century law dictates how Congress should certify the Electoral College and settle disputes over a state’s presidential electors. It’s a possibility that could be ripe for litigation, as the constitutionality of the law has never been challenged before.
View Trump and Biden head-to-head polling

House Speaker Nancy Pelosi sent a letter to House Democrats Sunday warning that the delayed vote count Trump has suggested could occur would swing the election to Congress — where each state gets one vote, and Republicans have a 26-22 advantage in House state delegations, with two states even. Pelosi urged Democrats to support the Democratic-aligned super PAC focused on House races to help Democrats gain an edge. “How many state delegations the Democrats win in this upcoming election could determine who our next President is,” she wrote.

‘Literally dangerous to the country’

Perhaps the most likely consequence of Trump’s claims of fraud and a rigged election is the public perception of the outcome, no matter who is declared the victor.

Democrats fear that Trump will try to claim victory on election night, before millions of mail-in votes are tallied, which could delegitimize the results among his supporters should he lose, undermining confidence in a core democratic principle of the country.

Polls have shown a higher percentage of Democrats than Republicans plan to vote by mail, meaning their votes may not be tallied until later.

If Trump goes even further and claims that an election result against him is rigged, Democrats warn it will have even more dangerous consequences.

“What he’s doing is downright dangerous to the country, in a way that we’ve never seen,” said Sen. Angus King, a Maine Independent who caucuses with the Democrats. “The peaceful transfer of power is at the heart of our entire system, and our system is based upon trust. And to undermine that trust and implicitly enable violence by delegitimizing the election results is dangerous, literally dangerous to the country.”