President Donald Trump started off his week retweeting a series of bizarre claims from supporters, including one that Dr. Anthony Fauci supports ID cards ‘to go shopping’ and a claim from game show host Chuck Woolery that charges the Centers for Disease Control and Prevention with lying about the coronavirus.

The president’s retweets come as he doubles down on his war against Fauci, the director of the National Institute of Allergy and Infectious Diseases, and other medical experts who has raised alarm about the growing number of coronavirus cases in the country.

Trump has pushed the country to move past the virus and return to normal life. His stance puts him at odds with many fellow Republicans, who have asked Americans to wear masks amid the rising cases, and with medical experts, including some in his administration who have warned about the spike in infections. Even most Americans appear to disagree with the president as polls show him receiving low marks on his handling of the pandemic. 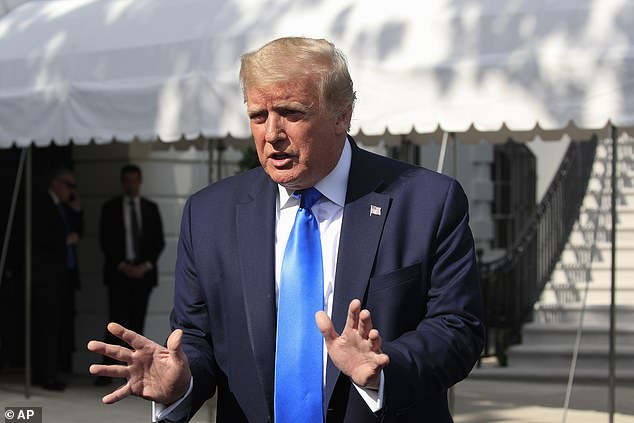 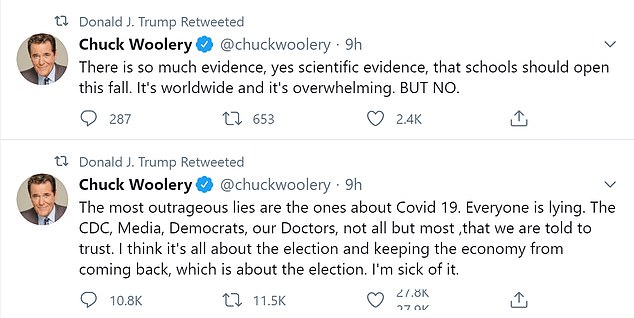 One of the retweets from the president on Monday included a bizarre conspiracy theory that Fauci supports ‘an ID card to go shopping.’ The original tweet was from Dr. Mark Young – a conservative podcast host who calls himself doctor but it’s unclear if he has a medical degree.

‘So based on Dr. Fauci and the Democrats, I will need an ID card to go shopping but not to vote?,’ Young tweeted. It’s unclear where his claim originated or what it’s about.

Young co-hosts a podcast with Woolery, a longtime Trump supporter who also had the president’s attention Monday morning.

Trump retweeted Woolery’s claim the CDC, the media, Democrats and doctors are doing this to keep the president from wining a second term. He offers no proof of his allegations nor does he detail what the lies are.

‘The most outrageous lies are the ones about Covid 19. Everyone is lying. The CDC, Media, Democrats, our Doctors, not all but most ,that we are told to trust. I think it’s all about the election and keeping the economy from coming back, which is about the election. I’m sick of it,’ Woolery wrote and Trump retweeted.

Woolery shot to fame in the 1980s as the host of various game shows, including a stint as the original host of Wheel of Fortune and the original incarnation of Love Connection. He has no medical background.

He’s also claimed his support of the president has ruined his career.

‘I have pretty much destroyed my career by openly supporting Trump and letting all know, I am a conservative. Painful at times, but true. After all is said and done. It was my choice and I can live with it. I would do it all again,’ he tweeted in November 2019.

Trump also retweeted Woolery’s support for reopening schools this fall, which the president has been pushing for as another way to help the economy. The argument being if kids can get back in classes then parents can return to work.

‘There is so much evidence, yes scientific evidence, that schools should open this fall. It’s worldwide and it’s overwhelming. BUT NO,’ Woolery wrote.

Woolery’s tweet matches some of Trump’s thinking on the coronavirus.

The president has claimed Democrats are using the pandemic to their advantage in the November election.

Last week, during a push to reopen schools this fall, Trump accused Democrats with playing politics on keeping kids out of classrooms.

He argued Democrats want to keep schools closed to help them in the general election this November. The decision to reopen schools lays in the hands of the nation’s governors, who are a mix of both parties. 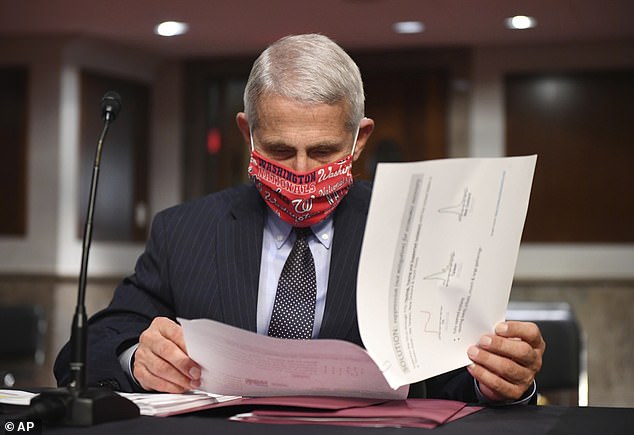 President Donald Trump doubled down on his attack on Dr. Anthony Fauci, the director of the National institute for Allergy and Infectious Diseases. Fauci, a member of the White House Coronavirus Task Force, said he has not briefed the president in months 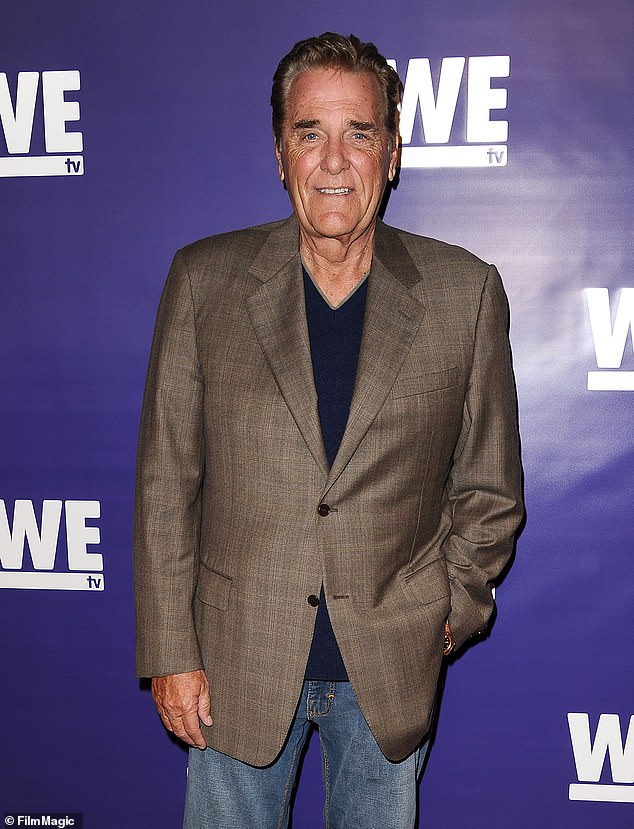 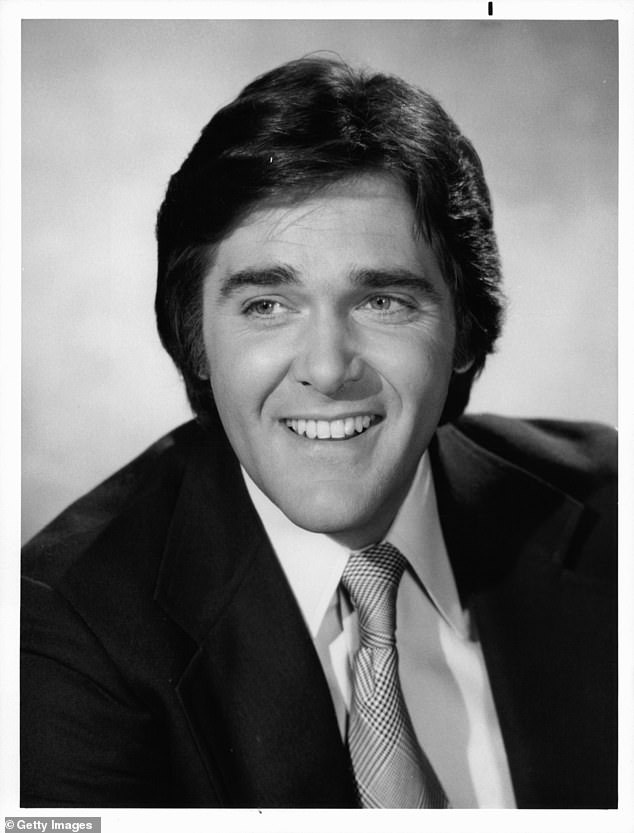 Chuck Woolery shot to fame in the 1980s as the host of various game shows, including a stint as the original host of Wheel of Fortune and the original incarnation of Love Connection

Trump has turned his focus to the economy in recent weeks even as coronavirus cases spike throughout the nation. He has pushed states to reopen but several of them are walking back that process – reclosing bars, restaurants and gyms – as the number of coroanvirus cases is on the rise.

The president has barely acknowledged the disease in recent days.

He was in Florida on Friday – a state that has become the new epicenter for the pandemic – and had no coronavirus-related events. He was briefed on drug smuggling, spoke at a roundtable with Hispanic leaders and attended a fundraiser.

Florida, on Sunday, reported a record high in daily infections for the virus with 15,300 new cases on its books.

On Wednesday the president is scheduled to go to Atlanta but is not scheduled to visit CDC headquarters. Instead he’ll deliver remarks on infrastructure.

He also hasn’t spoken to Fauci in months, the doctor told the Financial Times. Fauci, a member of the White House Coronavirus Task Force, said he last saw the president on June 2 at the White House.

Fauci, an expert in infectious diseases, has been sidelined by the White House from doing interviews with major news outlets. He has, however, appeared on podcasts and other smaller outlets, where his words of warning on the pandemic have gone viral.

Additionally, the White House took out a hit on Fauci over the weekend, sending out research that detailed statements the doctor made about the virus early in the pandemic.

Trump, meanwhile, has kept his focus on the economy, which he believes is key to his re-election. Voters give him high marks on that issue.

But Americans have expressed their disapproval with the president’s handling of the coronavirus.

A new poll ABC News/Ipsos poll out Friday found 67 percent disapproved of Trump’s response to the pandemic and only 33 percent approved.

It’s the highest level of dissatisfaction with Trump’s handling of the virus. Additionally his presidential approval rating hit a low of 33 per cent.

The president has repeatedly expressed his belief the coronavirus will ‘just disappear’ even as more than 3.3 millions Americans have been infected by the disease and more than 137,000 have died. 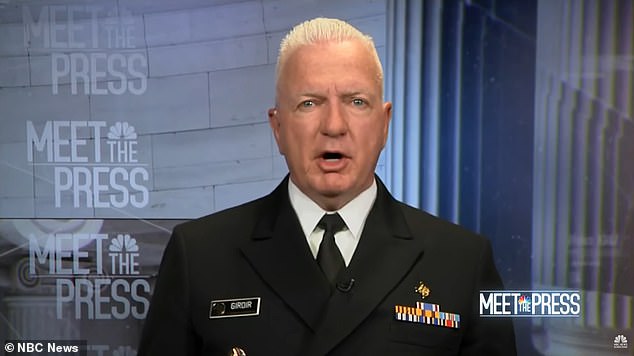 Admiral Brett Giroir, an assistant secretary with the Health and Human Services department, said Sunday he expects the number of deaths from the coronavirus to rise 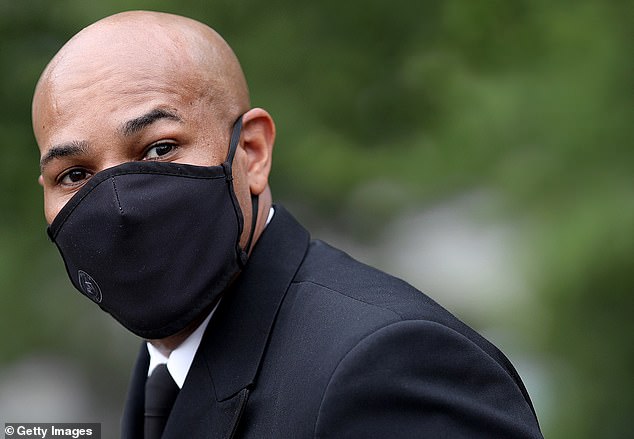 Dr. Jerome Adams, the surgeon general, said the administration is working with states to combat the rising number of coronavirus cases

But some of the president’s own medical experts on Sunday expressed concern with the rising number of cases.

Admiral Brett Giroir, an assistant secretary with the Health and Human Services department, and Dr. Jerome Adams, the surgeon general, both said in appearances on the Sunday shows that the spike in infections has them worried.

‘We’re all very concerned about the rise in cases, no doubt about that,’ Giroir said on ABC’s ‘This Week.’

‘We do expect deaths to go up,’ he said. ‘If you have more cases, more hospitalizations, we do expect to see that over the next two or three weeks before this turns around.’

Adams, who wore a mask during his interview on CBS’ ‘Face the Nation,’ said the administration is working with states on the response to the rise in cases.

‘Please don’t mistake me for saying we’re happy with where we are,’ he said. ‘What I’m saying is that we are working with states to make sure we can respond to this incredibly contagious disease. And part of that, again, is making sure we’re slowing the spread, right? People understand the importance of wearing face coverings and good hand hygiene and staying home when they can.’