“They’re going to take advantage of the learning curve,” said Vijay Samant, a former Merck executive who oversaw the production of three successful vaccines during his tenure. Samant said vaccine manufacturers have had months to work out supply bottlenecks and that manufacturing was always projected to speed up in the coming months — a boon for the Biden administration.

“They may get a lot of credit because all of a sudden vaccine doses are going to become available and it’s, ‘Oh, well, we did it,’ ” Samant said. “Let me tell you, that’s how it works. They’re on the right end of the curve.”

Connecticut Gov. Ned Lamont, a Democrat, sounded similarly optimistic Thursday, predicting that vaccine supply will rapidly increase in February and March. The governor was fresh off a call with Pfizer, during which the company “reiterated their plan to significantly ramp up production in February,” said the governor’s spokesman Max Reiss. Much of that ramp-up is taking place even before the Biden administration makes any moves under the Defense Production Act.

Dr. Anthony Fauci, director of the National Institute of Allergy and Infectious Diseases, appeared to agree with the assessment Thursday.

In an interview on ABC’s “Good Morning America,” Biden’s chief medical adviser expressed confidence in the President’s once seemingly far-reaching goal to vaccinate 100 million people in his first 100 days.

“I feel fairly confident that that’s going to be not only that but maybe even better,” Fauci said, adding that he had looked at the contractual agreements that had been made. “The amount that will be coming in, we will be able to meet that goal.” 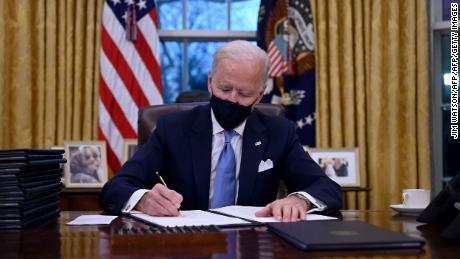 Still, questions remain about where US vaccine supply currently stands. The new administration has touted robust federal plans to launch huge vaccination sites and deploy mobile units to hard-hit communities, at the same time some states are canceling appointments at existing vaccination sites, citing a lack of vaccine supply.

Biden’s team has said it’s flying somewhat blind when it comes to the supply of vaccine and how it has been allocated across the country. A source close to the transition told CNN that the Biden team had been denied access to critical resources it needed to accurately gauge the supply and prepare to take over the rollout before Biden took office.

“The cooperation or lack of cooperation funds from the Trump administration has been an impediment,” White House Covid-19 coordinator Jeff Zients told reporters. “So we don’t have the visibility that we would hope to have into supply and allocations.”

To be sure, there’s still not nearly enough vaccine available — in the US or worldwide — and the US has stumbled at getting shots into arms quickly. But the Biden administration also appears to be trying to manage expectations, playing up the shambles the Trump administration left behind while figuring out what concrete steps it can take to improve vaccine manufacturing and distribution.

The Biden administration has not clearly articulated what it’s doing to immediately improve vaccine supply, except to task agencies with looking for opportunities to use the Defense Production Act.

The White House did not address how they would be communicating or working with states, but in a statement to CNN spokesman Kevin Munoz reiterated that they would be “listening to the unique needs of states and tailoring the federal government’s resources and guidance accordingly to ensure we are getting vaccines in the arms of Americans as quickly and safely as possible.”

White House officials said they have asked the Department of Health and Human Services to look for all potential sources of a type of syringe that can help extract more doses of the Pfizer vaccine from each vial. On Thursday, Biden said he would sign an executive order to use the Defense Production Act to direct federal agencies and private industries to “accelerate the making of everything that’s needed to protect, test, and vaccinate and the care of our people.”

A former administration official told CNN that the Trump administration had already implemented the Defense Production Act to assist each of the six vaccine manufacturers, as well as on needle and syringe contracts.

“We’ll be working paying close and careful attention to all of the components of the supply chain to ensure manufacturing keeps up with what we need,” Tim Manning, the White House Covid supply coordinator, told reporters. “The Defense Production Act is a powerful tool — powerful set of tools — and there are many ways we can use it to help ensure that there are adequate and growing supplies of vaccine.” 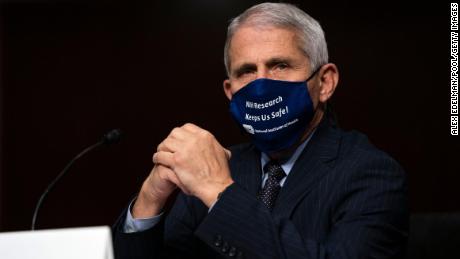 Samant, the vaccine expert, said the administration would be better off focusing on the availability of raw materials like lipids rather than specialized syringes.

“It’s like the most ridiculous thing to chase after,” Samant said of ramping up syringe production, adding that such a move might, at best, improve vaccine supply by 5%.

For the Biden team, it’s critical to understand how much supply is on hand and how much could realistically be available in the coming months. States have said they need clear and consistent guidance on vaccine supply so they can continue to streamline their vaccination programs.

“We will work to provide projections on supply. We hear over and over from governors and local leaders that they just don’t know what supply is coming and can’t plan. We will absolutely across the next few days to get our arms around what’s going on, make sure that we are communicating with states and localities, so they can prepare, effectively,” Zients added.

According to one health official involved in the vaccine distribution process, hospitals receiving the Moderna vaccine complained of being completely in the dark on when they were receiving it and how much they were getting and, in some cases, were sent scrambling when they received surprise shipments. Moderna declined to comment.

All these problems are now landing squarely in the lap of the new administration.

Some state officials said they’re already concerned about what the administration’s plan will be to allocate vaccines and communicate with states.

Under the previous administration, then-Vice President Mike Pence and members of the Covid task force held regular calls with the nation’s governors during most of the pandemic. While some governors found the calls largely useless, they could at least rely on the briefings as an opportunity to hear from high-ranking medical experts and ask questions of the administration.

A day after Biden took office, state officials told CNN there is still a lot of confusion as to how states will be working and communicating with the Biden administration as the pandemic continues to surge and vaccine distribution is woefully behind.

According to one Republican state official, the National Governors Association has reached out to some of its governors about working with the Biden administration on Covid. However, not all governors are members of the organization and it remains unclear how the administration plans to work with those outside the association.

A Democratic state official said they, too, had not had any regular communication with the new administration.

Dr. Bechara Choucair, the White House vaccinations coordinator, has been in touch with some governors but had not laid out how the administration would tackle vaccine allocations.

Biden said Thursday that each state would be assigned a liaison with the Federal Emergency Management Agency.

But in a news briefing Thursday, Psaki couldn’t offer any more specifics on how the Biden administration will improve communications with states.

The new Covid team, she said, “will be engaging with governors, Democrats and Republicans, mayors, local elected officials, to gain a better understanding of what’s happening on the ground.”