Liddy died Tuesday morning in Mt. Vernon, Virginia, and though he suffered from a “variety of ailments,” his death was not Covid-19 related, his son, Thomas Liddy, told CNN in a phone call. He had received the coronavirus vaccine three weeks ago.

Liddy, who worked for the reelection committee for President Richard Nixon, is infamously known for having overseen the break-in at Democratic National Committee headquarters in the Watergate office complex on the night of June 17, 1972, saying later that “I certainly regret that the mission failed.” He was convicted for his part in organizing the break-in on charges of burglary, conspiracy and wiretapping and served four-and-a-half years after President Jimmy Carter commuted his original 20-year sentence to eight.

Liddy later went on to host a radio show and hold an acting career. 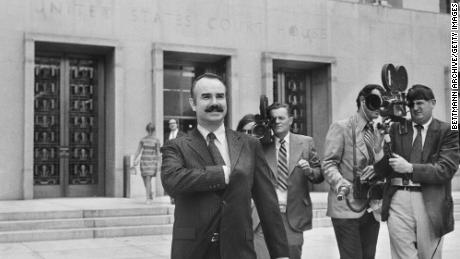 The Watergate break-in became the ostensible reason for Nixon’s political downfall, and in the days following the arrests Nixon would be the architect of a series of schemes to insulate the White House from responsibility for the bungled political espionage plot.

In late 1971, Attorney General John Mitchell, soon to head the reelection committee, and White House chief of staff H. R. “Bob” Haldeman decided that Liddy should be hired to lead an espionage program against the Democrats. Liddy had been involved in the harassment of Daniel Ellsberg, who released the Pentagon Papers in 1971.

Leading up to the 1972 election, Liddy served as general counsel to the Committee to Re-elect the President and devised a plan with the codename “Gemstone”: use kidnapping, burglary, surveillance and prostitutes to gather intelligence on political rivals, according to the Gerald R. Ford Museum. The committee’s director called for the elaborate, expensive plan to be pared down, but the break-in at the DNC headquarters made it through the revision.

Liddy repeatedly insisted that the break-in was not about campaign material, claiming that it was about a call girl ring allegedly involving some top Democrats.

“What we’re in there doing was trying to get the sexual dirt on the Democrats,” Liddy said after the fact, asserting: “I was told that we were going to repair an inoperative room bug.”

Liddy supervised from nearby but did not go in with the five burglars that were caught in the act. When the Watergate operation collapsed, it compromised Liddy and others, thus opening the possibility that Nixon’s hand in White House corruption could be revealed.

A former FBI agent, Liddy had a reputation among colleagues for recklessness. He once said that he put his hand in a candle flame to impress a new recruit, showing the alleged resulting mark on his hand while on television.

“I wish I had a dollar for every successful burglary I had when I was in the FBI, it was called a black bag job, standard procedure,” he said in an interview.

As the White House came under more heat, Liddy was often discussed by Nixon and top aides, with Nixon saying in tapes that “Liddy is pretty tough.”

Liddy — along with Bernard Barker, Virgilio Gonzales, E. Howard Hunt, Eugenio Martinez, James McCord and Frank Sturgis — was indicted in 1972 by a grand jury for involvement in the break-in at the DNC headquarters. In 1973, Liddy and former CIA employee James McCord, security director of the Committee to Re-elect the President, were found guilty of conspiracy, burglary and bugging the DNC headquarters.

“It was an occupational hazard, first of all,” he said after the fact. “Secondly it was my job to go to prison at the time, I feel no bitterness at all.”

Unlike some of his co-conspirators, Liddy never talked before or during his 52-month prison stretch.

“It doesn’t take any talent to keep your mouth shut,” Liddy said after his release. “I was the cut-out, so I took the hit. I was protecting my president and doing the best I could. It would have worked too, you know, if those other turkeys could have kept their mouths shut.”

After prison, Liddy took advantage of his notoriety, hosting a radio talk show, guest starring in TV programs — he once said, “I most of all go for the villain roles, I really like those” — and speaking engagements in front of conservative groups.

In the decades following his conviction, Liddy continued to be involved in Republican politics. In 1998, Liddy gave a fundraiser in his Scottsdale, Arizona, home for the late Arizona Republican John McCain’s senatorial reelection campaign, with the two posing for photographs together. In May 2007, as a presidential candidate, McCain was a guest on Liddy’s syndicated radio show.
A conservative, Liddy called for the US to withdraw from NATO and indicated opposition to DC statehood. In 2004, he also stressed that Deep Throat, the famous source for journalists Bob Woodward and Carl Bernstein’s reporting on Watergate, “certainly was not I,” saying, “I don’t really think there was a Deep Throat. I think it was a composite.” W. Mark Felt admitted the following year that he, then an associate director at the FBI, was the source.

Liddy once said Watergate was a tempest in a teapot. His actions, meanwhile, helped blow the lid off an American presidency.

“When I did Watergate, I probably had more fun doing that than I had doing anything else,” he said. “I do and act and live as most men only dream.”

This story has been updated with additional details.

CNN’s Tim Naftali and Carl Bernstein contributed to this report.