“Water covering a part of the main lanes causing people to sit on the roofs of their cars,” Gonzalez tweeted. All occupants are now out, he said.

“This is a cluster, but we will get it worked out,” he tweeted at one point.

Blaming aging infrastructure for the incident, Mayor Sylvester Turner said the 96-inch water main was 35 years old. Private contractors were working on it when it burst.

The main provides as much as 50% of the city’s water, Turner said at a news conference.

The city probably will be under an order to boil water for 24 hours, Turner said. Restaurants with no water pressure will have to close immediately.

It may take up to eight hours to fix the broken water main, Turner said. Gonzalez tweeted Thursday afternoon that it will take six to eight hours for the water to drain, and then repairs will be made.

The water main broke near Fidelity and North Carolina streets and “water flowed to 610 South/Ship Channel Bridge” about two miles south of the break, near the Buffalo Bayou, Gonzalez said. 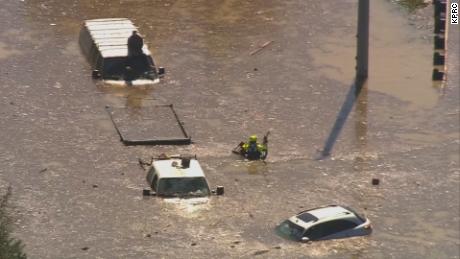 The sheriff’s department marine unit was called in to assist, Gonzalez said.