Latest News
Home /Its wild down here as Milwaukee County recount continues
The Trump campaign filed for a limited recount of two Wisconsin counties — Milwaukee and Dane — last week in a long-shot bid to overturn President-elect Joe Biden’s victory in the state. Milwaukee County is now on schedule to finish counting Friday, although by Wisconsin election law they have until December 1.

Six observers had to be removed by sheriff’s deputies in the first four days of the recount, County Clerk George Christenson said. One observer had to be removed twice. A “handful” of other observers were also asked to leave, though not by police, he said.

On Monday, a Biden observer was removed after an altercation with a Trump observer where social distancing rules were violated, Christenson told CNN.

“This is certainly a very contentious atmosphere we are living in right now, politically. There were very overzealous observers at times. And that’s died down over the course of every day,” Christenson said.

Milwaukee County contains Milwaukee, the state’s largest city and home to the largest Black population in Wisconsin. Biden beat Trump by 317,251 votes to 134,355 in that county, according to unofficial results from the Wisconsin Election Commission. Biden won the state by roughly 20,000 votes.

As of Tuesday night, Christenson said, about 380,000 of the approximately 460,000 votes cast in Milwaukee County have been processed for the recount so far, with the city of Milwaukee mostly counted and only two other municipalities left to process.

The official tally from the Wisconsin Elections Commission, which lags behind the counties, shows Trump has lost six votes and Biden has gained three in Milwaukee County, with 16% of municipalities completed.

The count is taking place at the Wisconsin Center, a convention center in central Milwaukee. Dozens of folding tables divided in half with acrylic glass line a massive windowless room with florescent lights and concrete floors. People walk around with stickers identifying their role; some say “ELECTION OFFICIAL,” “BIDEN OBSERVER” or “TRUMP OBSERVER.”

There had been three chairs for observers at each counting table: one seat for a Trump observer, one for a Biden observer, and one for a third party observer if there is one.

However, the rules had to be changed after some Trump observers who attended on Friday returned on Saturday claiming to be observers for the third party party, the official said.

After complaints by several clerks about the issue, the Wisconsin Elections Commission issued a ruling to remove every third chair unless there was already a third party observer sitting in the chair, according to the official.

In one instance, a woman physically assaulted an election worker who removed her jacket from a third party observer chair at one table, while the woman was sitting as a Trump observer at another table. The woman was removed by a sheriff’s deputy, though no charges were filed, the official said. 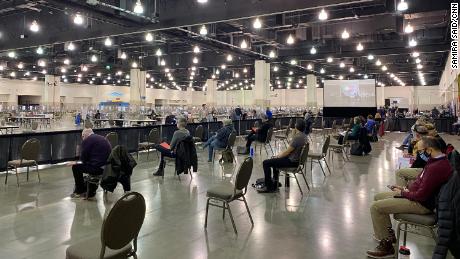 In another incident, a Trump observer who was not covering his nose with his face mask was asked repeatedly to wear his mask properly per Elections Commission guidelines. He was removed after ignoring the requests.

The man returned the next day. When an election official told the man he needed to wear his mask properly, the man took the mask off, told the official that he knew where the official lived, and recited the official’s home address. The man was removed by a deputy for threatening behavior.

“There are no restrictions on who can be a recount observer,” Wisconsin Elections Commission spokesman Reid Magney told CNN. Observers are not required to be state residents, nor are they required to be registered or affiliated with the campaign for which they are observing.

By Tuesday, however, Christenson said the operation was running more smoothly. “There have been some growing pains, for sure. As you can see, this is a very big operation,” he said. “We tried to sort of nip those issue in the bud quickly.”