More than 1,000 students returned to Liberty University, a private evangelical Christian university, in Lynchburg, Virginia, a spokesperson confirmed to CNN on Tuesday.

Liberty University President Jerry Falwell Jr. and other leaders discussed whether to extend spring break and “risk students having a longer time to become exposed to the virus,” the school said in a statement. It decided it was safer to bring the students back to campus.

“During Spring Break, Falwell and his executive leadership team began meeting every afternoon to determine the measures that needed to be taken for all programs to go online and for students to be able to return to their dorms and use the campus dining services that they paid for,” the statement said.

Falwell’s decision to bring students back to campus flies against the guidance provided by state officials and the Centers for Disease Control and Prevention.

Virginia Gov. Ralph Northam issued a statewide order Monday to help slow down the spread of coronavirus. The order bans gatherings of more than 10 people and goes into effect just before midnight on Tuesday.

The order also closes non-essential businesses and shuts down all K-12 schools for the rest of the academic year. 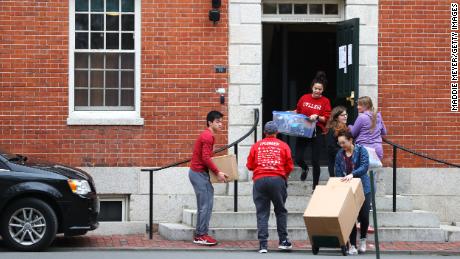 The university gave students a choice in whether they wanted to return by filling out an online form with their intent. As of Tuesday afternoon, over 1,100 students have returned to campus out of the student population of 14,000 to 15,000, Liberty University’s spokesman Scott Lamb said.

University officials are prepared for about 5,000 students to return to campus, Lamb added.

“Our thinking was, ‘Let’s get them back as soon as we can — the ones who want to come back,” Falwell said in the statement.

The university said that it was “in compliance of all state restrictions related to COVID-19” following a Virginia Department of Health inspection during its spring break after the state’s 10 person limit on restaurants went into effect. However, it was unclear if that is still accurate following students’ return.

CNN reached out the Department of Health but did not immediately receive a comment.

Now that spring break is over, the university moved all instruction online on March 23, according to a statement.

Students have the option to remain at home or return to campus to take classes online, the university said.

Is mail theft surging in…