Latest News
Home /Man charged with hate crimes in connection with attacks on synagogues in the Bronx, police say

Jordan Burnette is being charged with burglary as a hate crime and also faces numerous charges related to the acts of vandalism as alleged hate crimes that have taken place in the Riverdale community, NYPD Deputy Inspector and Hate Crimes Task Force commanding officer Jessica Corey said in a news conference Saturday evening.

“Hopefully life will resume back to normal, and people will be able to worship without fear,” Miller added.

CNN has not been able to determine if Burnette has an attorney.

Surveillance footage shows a suspect throwing rocks at the synagogues, Sammon said, breaking windows in doors. All of the attacks occurred after dark, in the late night and early morning hours of the day, he said.

Burnette was arrested early Saturday after officers on patrol from the 50th Precinct noticed he was riding a bicycle against the flow of traffic in the vicinity of Delafield Avenue and West 246th Street, Corey said.

After officers attempted to issue a moving violation, Burnette failed to provide identification and became uncooperative, causing the officers to take him into custody and bring him back to the 50th precinct for further investigation, Corey said.

During the course of investigating Burnette at the precinct, NYPD sent officers back to the location where Burnette was taken into custody and found a van with a broken windshield, she said. 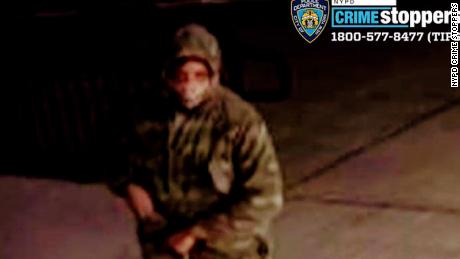 Surveillance footage from a nearby home showed Burnette throwing a rock at the van’s windshield, Corey said.

Officers were able to confirm the bikes were the same kind that Burnette was riding when he was taken into custody, Corey said.

The arrest was the result of “the combination of very advanced detective work: intelligence, analysis, surveillance and patrol,” Miller said.

The NYPD’s Counterterrorism Bureau had guarded houses of worship and detectives from the Hate Crimes Unit provided surveillance on multiple nights, he said.