Melania directly attacked Democratic presidential candidate Joe Biden on the coronavirus, claiming: “Now he suggests that he could have done a better job. Well, the American people can look at Joe Biden’s 36 years in Congress and eight years in the vice presidency and determine whether they think he’ll finally be able to get something done for the American people.”

The first lady also spoke about her family’s struggle with the virus and demonstrated compassion for those suffering the virus — something rarely done by President Donald Trump in rallies.

“Like many of you, I have experienced the firsthand effects of Covid-19 — not only as a patient — but as a worried mother and wife. I know there are many people who have lost loved ones or know people who have been forever impacted by this silent enemy,” Melania Trump said in Pennsylvania.

The first lady’s first solo campaign appearance comes with just one week to go before the election. Her up-to-now campaign trail absence has marked a historic break from precedent, especially in a race that finds her husband fighting for votes. 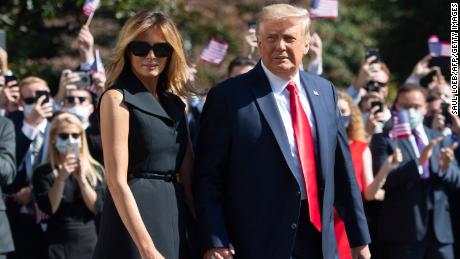 Every modern first lady to hold the position before Melania Trump has proved an important and impactful surrogate on behalf of their husbands. The President is particularly hunting votes from suburban White woman, a group with which the first lady may hold some appeal.

Melania Trump has largely proven herself a homebody without a taste for campaigning or giving political speeches, according to several sources. Her last appearance at a Trump campaign rally was June 2019, where she made brief remarks at the kickoff for her husband’s reelection efforts. Her last solo speaking event in support of Trump’s campaign was almost exactly four years ago, also in Pennsylvania, just days before the election.

At one point the first lady also addressed impeachment and tied it to the Democrats’ Covid-19 response.

“No one should be promoting fear of real solutions for purely political ends … The Democrats have chosen to put thier own agendas over the American people’s wellbeing. Instead, they attempt to create a divide. A divide in something that should be non-partisan and non-controversial. A divide that causes confusion and fear instead of hope and security. That is not the leadership,” she said.

“Let us also not forget what the Democrats chose to focus on when Covid-19 first came into our country. While the President was taking decisive action to keep the American people safe, the Democrats were wasting American taxpayer dollars in a sham impeachment,” she added.

Melania Trump also made mention of her husband’s presence on social media, saying, “For the first time in history the citizens of this country get to hear directly and instantly from their President every single day through social media.”

She then added: “I do not always agree what the way he says things, but it is important to him that he speaks directly to the people he serves.”

“This administration chooses to keep moving forward during this pandemic, not backward,” she said.

The first lady also asked participants to follow US Centers for Disease Control and Prevention guidelines — despite the fact that the crowd at the indoor event was not socially distanced, however most attendees were wearing masks.