Today, around 8.7 million properties are located in Special Flood Hazard Areas as determined by FEMA’s flood maps, the legal standard used in the US to manage floodplains, determine insurance requirements and price policy premiums.

But as many as 14.6 million properties — nearly 70% more than are in FEMA’s Special Flood Hazard Areas — may actually be at significant risk of flooding, according to First Street’s modeling. The discrepancy between FEMA’s maps and this new data means that some 6 million property owners could be unaware of their current flood risk, the group says.

“If you’re a homeowner, renter or buyer in this country and you want to understand flood risk, the only data that’s available to you are the FEMA flood maps,” said Matthew Eby, First Street’s founder and executive director. “And the FEMA flood maps are made to determine flood insurance rates — not necessarily to determine what your personal flood risk is.”
As climate change raises sea levels and leads to more extreme rainfall events, even more homeowners will have to contend with the threat of flooding, well within the life of a 30-year mortgage signed today.

First Street found that by 2050, the number of properties at significant risk of flooding is expected to climb even further to 16.2 million.

The issue is already growing in urgency, as huge swaths of the country have been inundated by devastating floods in recent years.

Flooding is now the most common and costly natural disaster in the US, causing some $155 billion in property damages in the last decade, according to Michael Grimm, the assistant administrator for risk management for the Federal Insurance and Mitigation Administration, who testified before the House Science Committee in February.
Last year, many parts of the Midwest and South were swamped by flood waters that lingered for months and caused $6.2 billion in damages and four deaths, according to the NOAA.
In 2017, Hurricane Harvey, a powerful Category 4 storm, dumped a record-breaking 51 inches of rain on parts of Texas, putting large parts of Houston underwater. But about half of the homes in Houston affected by flooding were outside mapped floodplains, according to a National Academy of Sciences report on urban flooding.

In the future, changing precipitation patterns will continue to cause problems for many inland towns and cities.

But as the climate changes, the combined threats of storm surge from hurricanes and sea level rise means flooding will be most dramatic in coastal areas, First Street found.

By 2050, nearly 98% of the properties in New Orleans could be at substantial risk of flooding. South Florida will also see major impacts, with Miami and Tampa both projected to see more than half of all properties at risk of flooding by 2050, according to the First Street model.
However, FEMA’s flood maps do not account for the effects of climate change, a reality Grimm appeared to acknowledge in his House testimony, saying there is a “lack of consideration about future weather patterns and changing coastal conditions” in current maps.

Other shortcomings of FEMA’s flood maps have long been recognized, even by the agency itself.

During his House testimony, Grimm said that FEMA still has not completed flood maps for huge swaths of the US.
And though FEMA maps are required by Congress to be reassessed every five years, Grimm says it takes seven years on average to complete a new flood map, meaning that some maps may technically be out of date by the time they’re finished. 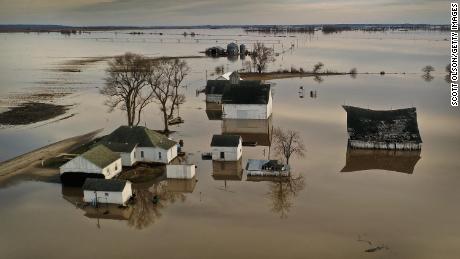 In an emailed response addressing First Street’s findings, David Maurstad, FEMA’s deputy associate administrator for Insurance and Mitigation said, “FEMA is constantly working to improve the production of the Flood Insurance Rate Maps within the context of changing conditions.”

Still, this new data shines a light on a growing climate risk that millions of Americans are already facing, though many may be in the dark about their personal exposure, experts say.

“This is more evidence that shows our mapping system is not working efficiently and we need to fix it to better our understanding about flooding in the United States,” said Dr. Hamed Moftakhari, an assistant professor at The University of Alabama, who studies the threats natural hazards pose to coastal communities.

In addition to its report, First Street is also launching a new interactive modeling system called “Flood Factor,” which will allow prospective homebuyers to explore the current and future flood risk for any on or off-market property in the contiguous US.

The tool assigns a Flood Factor score between 1-10 — with one being the lowest risk and 10 being the highest — and allows users to explore how a property’s flood risk is projected to change in the coming decades.

“Sophisticated investors have privately purchased flood risk information from for-profit firms for years,” Eby said in a press release. “First Street Foundation has not only taken this kind of data to the next level, using peer-reviewed science, but is correcting an asymmetry of information by providing free access to everyday Americans.”