The fast-moving fires, fueled by high winds and low humidity, increased quickly since Monday, damaging at least eight homes and threatening thousands of others.

As of late Tuesday night, the Blue Ridge Fire in Orange County’s Yorba Linda had charred 14,334 acres, according to an update from Cal Fire. No containment has been reported.

The update said that seven structures were damaged, and one was destroyed in the blaze, which is also threatening more than 20,000 other structures. 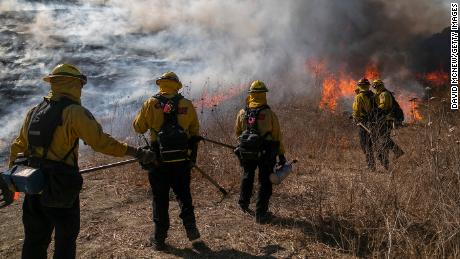 Extreme fire weather in the area, including high winds between 30 to 50 mph pushed the flames into Chino Hills, northeast of Yorba Linda, on Tuesday.

Winds are forecast to weaken overnight to between 20 and 25 mph, and firefighters are hoping to use that time to build containment lines around the fire, Cal Fire said in the update.

About 20 miles south, the Silverado Fire has burned 13,354 acres near Irvine since early Monday morning, a Cal Fire incident update said late Tuesday night. The cause of the fire is under investigation and is 5% contained.

No structures have been lost or damaged, according to Cal Fire, and more than 1,200 fire personnel are working on the blaze.

Two firefighters were critically injured in the blaze and are “fighting for their lives,” Orange County Fire Authority Chief Brian Fennessy said in a news conference on Tuesday.
The Irvine Unified School District chose to cancel school Wednesday “due to the ongoing and significant impacts of the Silverado Fire throughout the city of Irvine,” a message on the district website said. 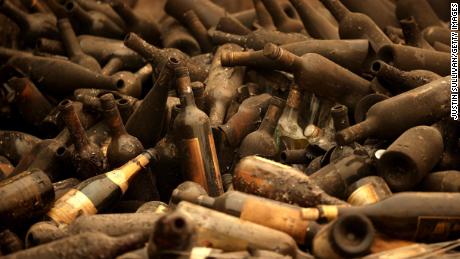 Nearly 30,000 residents from Yorba Linda and Chino Hills were evacuated as of Tuesday morning, according to the Chino Valley Fire Department.

Animals evacuated from the Silverado Fire

As the fires grew, many animals were rescued from the area.

On Tuesday, a fire crew on a brush rig rescued a barn owl from the flames of the Silverado Fire, the OCFA said in a tweet. “He’s safe and sound and currently with animal control.”
The nearby Orange County Zoo in Irvine Regional Park, which is under a mandatory evacuation order due to the Silverado Fire, had to evacuate its furry residents. 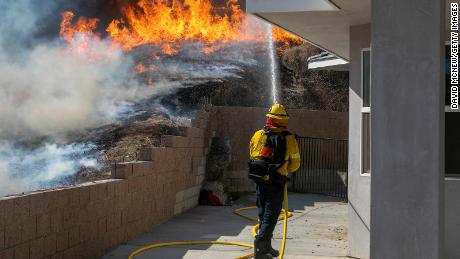 Approximately 150 animals are being sheltered by the Santa Ana Zoo, which is about 15 minutes from the OC Zoo. Most are native to the Southwest United States and include birds of prey, bobcats, coyotes and reptiles. Raccoons and a beaver also made the trek across town, Santa Ana Zoo manager Ethan Fisher told CNN.

This is the second time animals have had to be relocated because of wildfires. The last time was in October 2017. 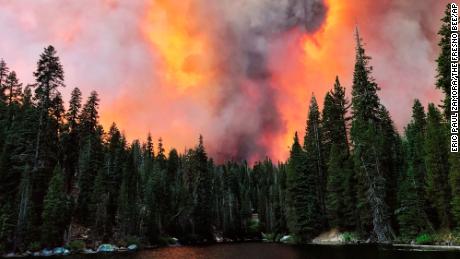 Zoos typically have contingency plans in case of emergency and the OC Zoo keeps extra kennels and supplies on hand for just this type of incident. The zoo staff will transfer as well to care for the relocated animals. The animals are not on display.