“I don’t think it’s wise to be bringing a lot of people to one location to vote,” Cuomo, a Democrat, said Saturday during a news conference. He also extended the state’s tax filing deadline to July 15.

The US surpassed Italy and China this week to become the country with the most coronavirus cases in the world with more than 102,963 known cases, according to CNN’s tally. At least 1,590 people have died in the US, with at least 402 of those deaths reported on Friday alone.

More than a third of the country’s cases are in New York — which has been in a partial lockdown for a week as officials try to slow the spread of the virus and hospitals scramble to keep up with the patients streaming in.

The rate of new cases may be slowing in New York, but Cuomo has said it may take 21 days for the state to hit its peak and begin going down. 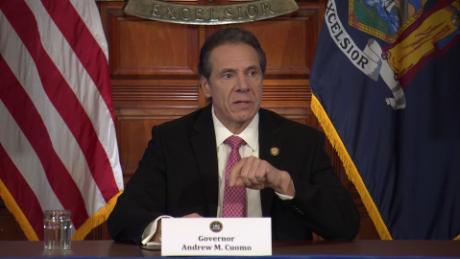 Speaking at the White House, Trump said, “We might not have to do it, but there’s a possibility sometime today” he will enact a quarantine.”

Asked about Trump’s possible quarantine comments at Saturday’s news conference, Cuomo said he and the President had not talked about it.

The governor went on to say he didn’t know what such a quarantine would mean. “I spoke to the President about the ship coming up and the four sites. I didn’t speak to him about any quarantine,” Cuomo said.

Trump said on the White House South Lawn that he had spoken with Cuomo Saturday, but then at Joint Base Andrews the President said, “I’ll speak to the governor about it later,” referring to the quarantine.

This story has been updated with additional developments.

CNN’s Sheena Jones and Jason Hoffman contributed to this report.