Officials at City Hall gathered Monday to review which potential restrictions could be imposed on areas that now have COVID-19 rates up to four times the average of both NYC and the entire state of New York itself, the NY Post reported.

Such measures could include shutting down all non-essential businesses in each of the areas again, banning gatherings of groups of more than 10, closing private schools and daycare centers in breach of certain safety requirements, and issuing harsh fines for those who refuse to wear masks.

The potential shutdowns would represent the first time the city has rolled back its reopening efforts since the virus first began ravaging the city in March.

‘City Hall is deeply, deeply concerned,’ Mayor Bill de Blasio’s administration wrote in a statement. ‘The most recent numbers have not shown an improvement. We’ve engaged in aggressive outreach, education and enforcement, in addition to encouraging and providing testing.

‘As outlined by the Department of Health previously: If the indicators continue to rise, there must be additional enforcement actions. For the first time in the city’s recovery period, there could be the immediate scaling back of activities in these ZIP codes if progress is not made by Monday evening.’

The city didn’t specify which neighborhoods could be affected by the sudden lockdowns, but health officials warned about the emergence of COVID-19 clusters in several communities across Queens and Brooklyn last week. 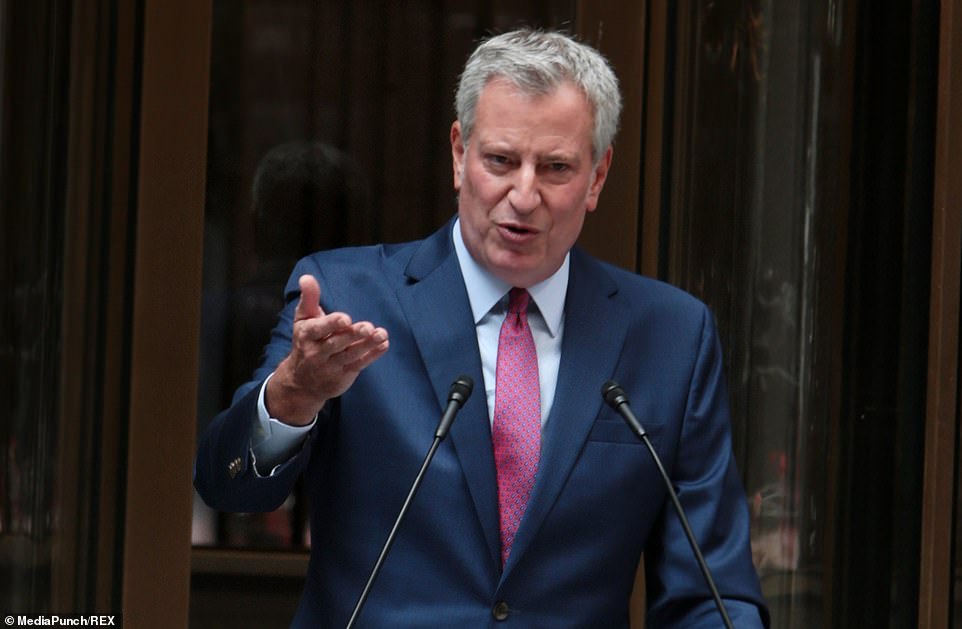 ‘City Hall is deeply, deeply concerned,’ Mayor Bill de Blasio’s administration wrote in a statement. ‘The most recent numbers have not shown an improvement. We’ve engaged in aggressive outreach, education and enforcement, in addition to encouraging and providing testing 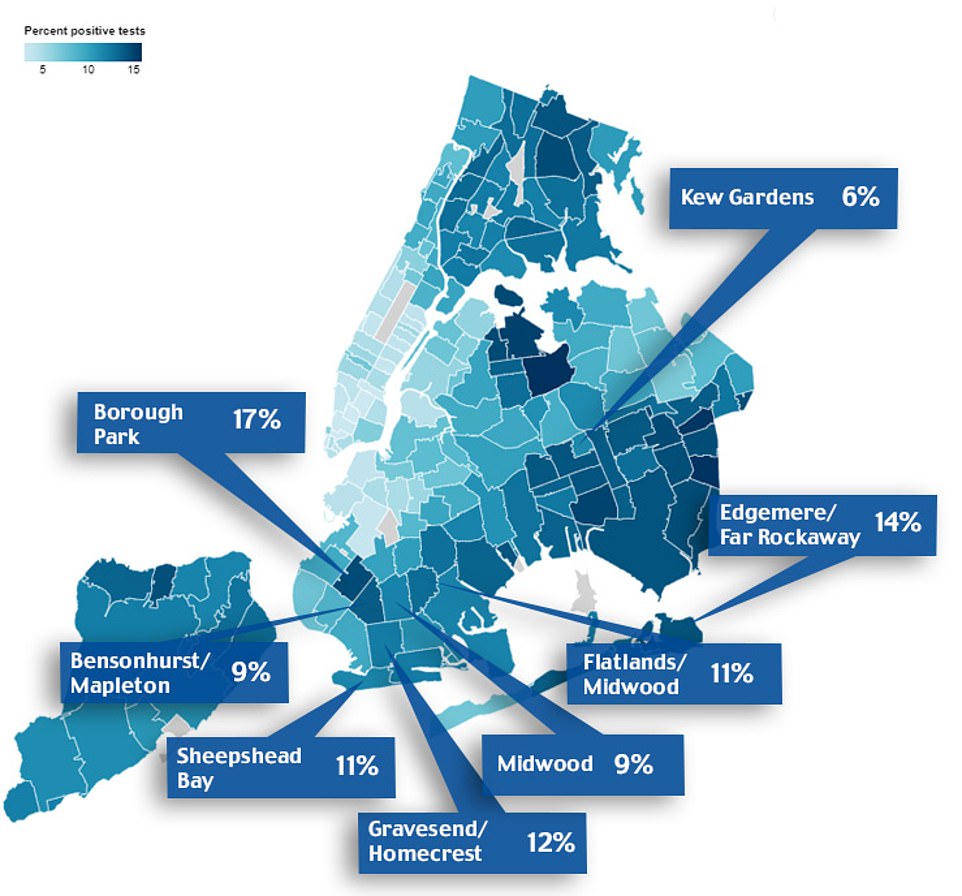 New York City is bracing for another round of crippling shutdowns as eight neighborhoods experience ‘alarming’ surges in coronavirus infection rates. The map above shows the Sunday infection rate for each problem neighborhood

The highest increase in infections came in the Borough Park neighborhood of Brooklyn, where the positivity rate hit 17 percent on Sunday, according to city data.

The average positivity rate across those eight neighborhoods – which now account for 23 percent of New York City’s more than 238,000 cases – is 3.3 percent higher than the city’s overall positivity rate, which came in at 1.3 percent on Friday.

Many of the outlined regions of the city have are home to a large Orthodox Jewish communities.

Williamsburg also was also cited as showing a troubling spike, although at a smaller rate, city officials said.

The surge comes as New York state recorded a positivity rate of 1.5 percent on Sunday – the highest it’s been since mid-July.

Gov Andrew Cuomo announced the latest positivity rate at a press conference on Monday, saying that spikes in the Big Apple were a ‘big contributor’.

He said that the state is ramping up efforts to keep the pandemic under control by sending in additional health department officers to high risk areas to ensure ‘additional testing and compliance measures’.

‘It’s very targeted and focused on those clusters,’ Cuomo said of the state’s heightened efforts.

New York state’s positivity hovered around one percent for an entire month before seeing a troubling increase over the past week.

From late July through the start of September the state was seeing an average of around 660 people test positive per day.

In the seven-day period that ended Friday, the state had averaged 817 positive tests per day.

On Saturday the state reported more than 1,000 new cases for the first time since early June, prompting Cuomo to warn that the virus ‘remains a force to be reckoned with throughout the country’.

In recent days Cuomo and his aides have highlighted the importance of containing clusters to ensure that they don’t spread to neighboring zip codes.

In addition to the neighborhoods in Brooklyn and Queens, Cuomo said that surges in the mid-Hudson region were pushing up the state’s positivity rate.

He outlined eight zip codes in the state with troubling rates.

Those zip codes can expect to receive some of the 200 rapid testing machines being deployed around the state in the next few days, he said.

The 20 zip codes with the most new cases accounted for 37 percent of the state’s total tally on Sunday, Cuomo added. 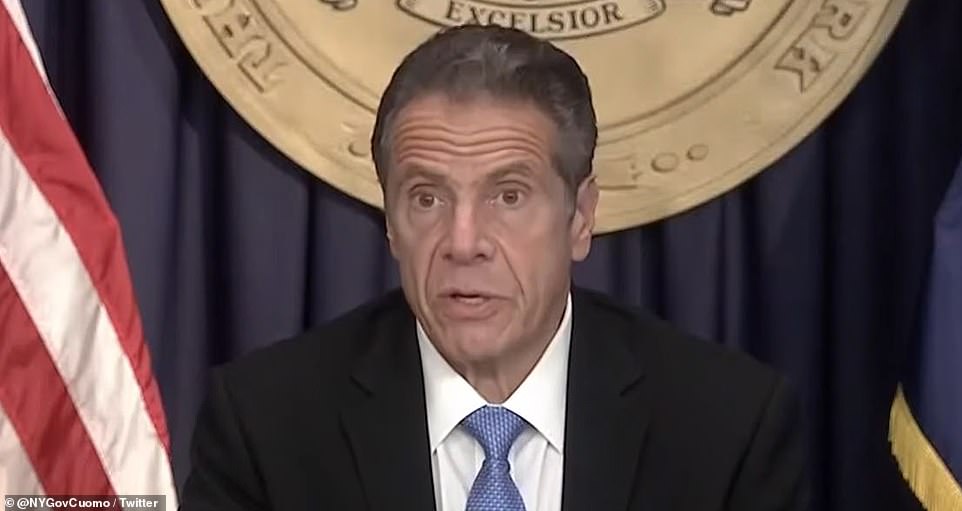 New York Governor Andrew highlighted the importance of containing coronavirus clusters during a press conference on Monday, where he announced that the state’s positivity rate climbed to 1.5 percent on Sunday – reaching its highest point since mid-July 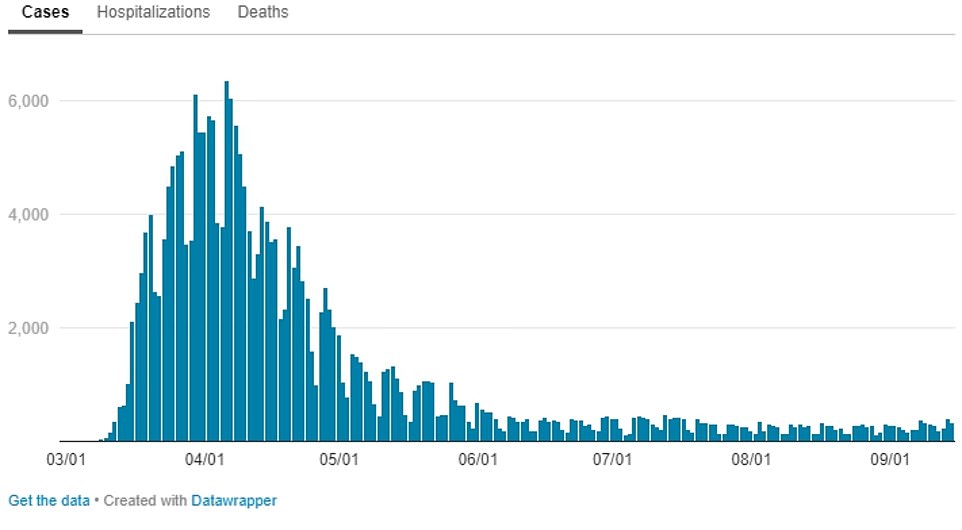 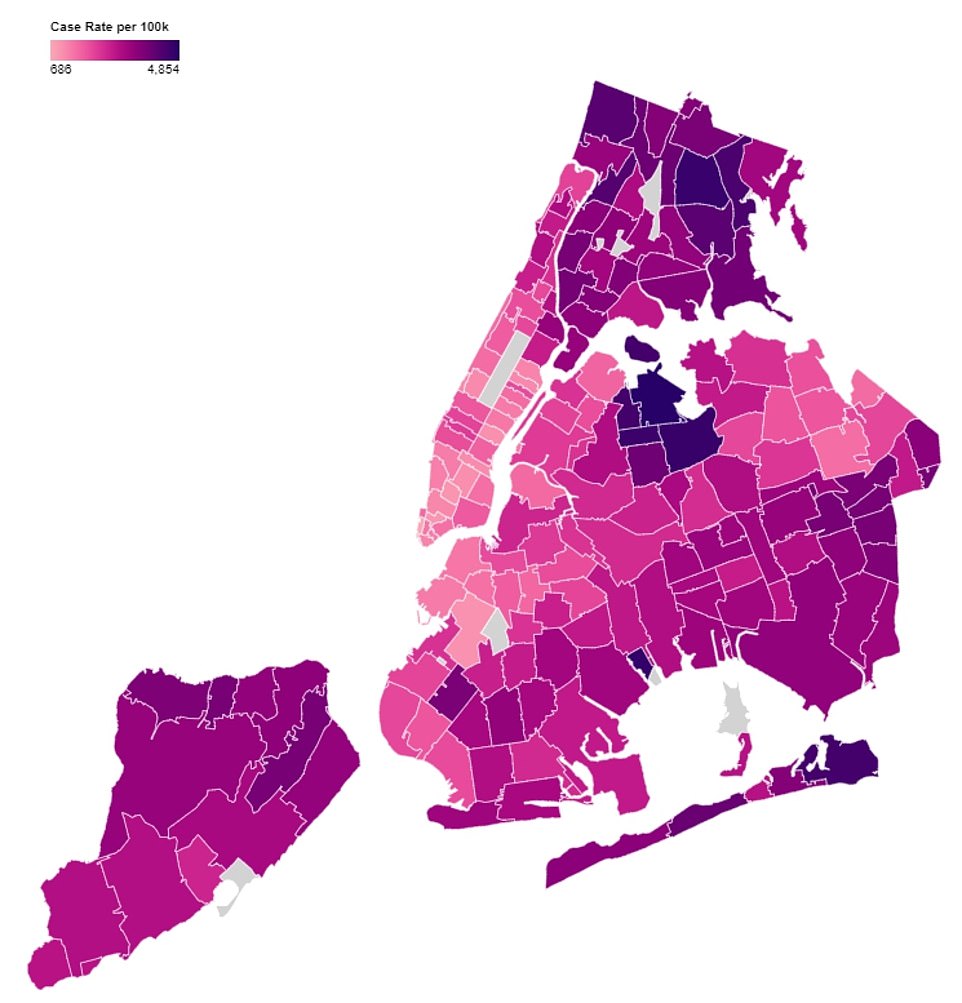 The map above shows cases per 100,000 people across all of New York City as of Sunday 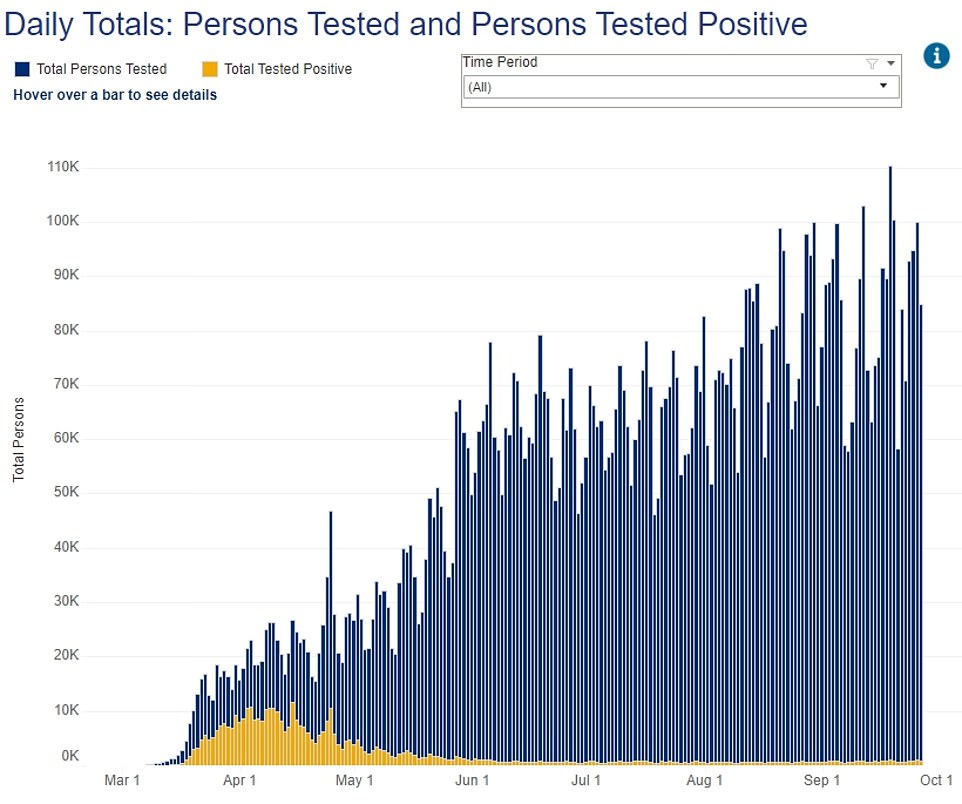 Once the epicenter of the US coronavirus crisis, New York City was quick to go into lockdown in the spring before slowly rolling back restrictions over the course of the summer.

The city has taken several big steps to returning to normal this month, including by reopening public schools for in-person classes and preparing for the return of limited indoor dining on October 1.

However emerging infection trends in parts of Brooklyn and Queens – compounded with fears of the forthcoming flu season exacerbating COVID-19’s strain on hospitals – have threatened to derail that progress.

Those tallies account for roughly half of the 455,626 cases and the majority of the 25,456 deaths across the state of New York.

Many of the neighborhoods identified as having troubling infections rates are home to large numbers of Jewish residents. 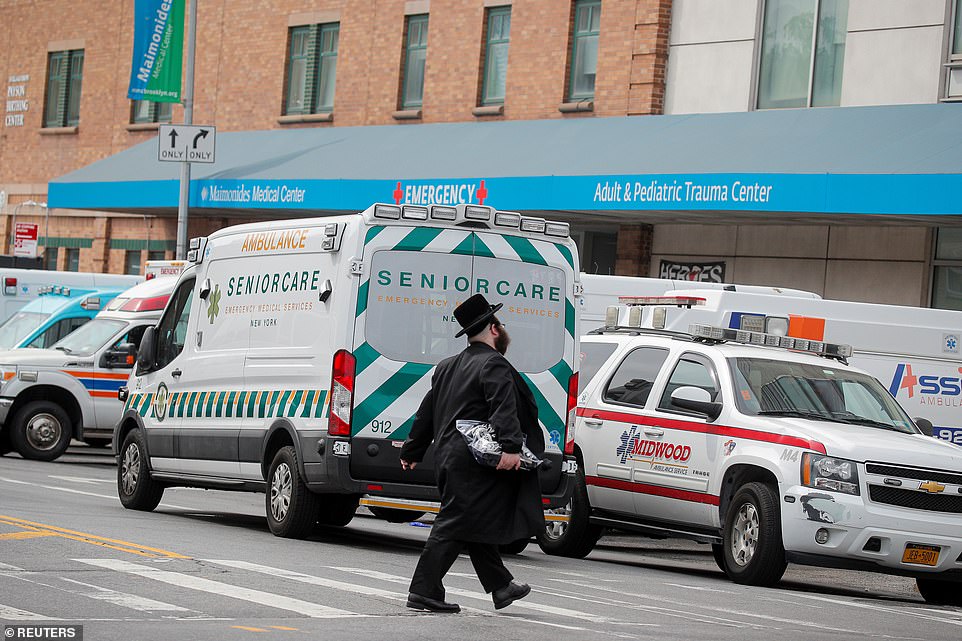 Many of the neighborhoods identified as having troubling infections rates are home to high proportions of Jewish residents. Three members of New York City’s Orthodox Jewish community died from COVID-19 just hours after presenting at the Maimonides Medical Center in Brooklyn (pictured) last week

Robocalls in English and Yiddish and sound trucks will urge residents to physically distance and wear a face covering, Katz said.

Katz also stressed the importance of complying with limits on social gatherings, which were flagrantly ignored by attendees of a wedding in Woodside, Queens, on Friday night.

Deputies arrived at Royal Elite Palace Caterers on Garfield Avenue just before midnight on Friday night and found about 284 people inside – exceeding the state limit of 50 people at social gatherings.

The sheriff’s office said a live band was playing and food and alcohol were being served while guests ignored social distancing guidelines.

The crowd was ordered to leave the event hall immediately, and the owner and manager of the venue were ticketed for misdemeanor offenses.

Royal Elite owner Aba Cohen was cited for violating the mayor’s emergency coronavirus measure and unlawfully altering the nature or character of a business. 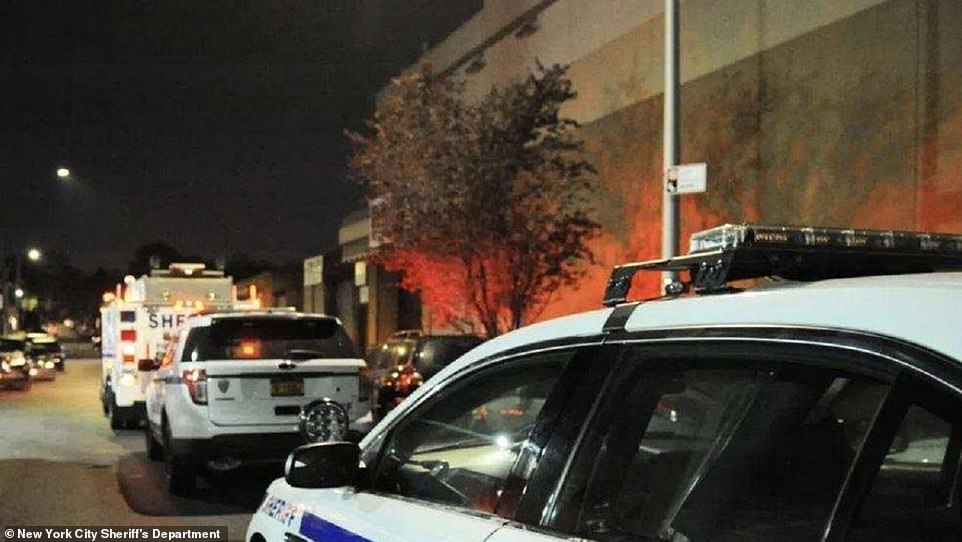 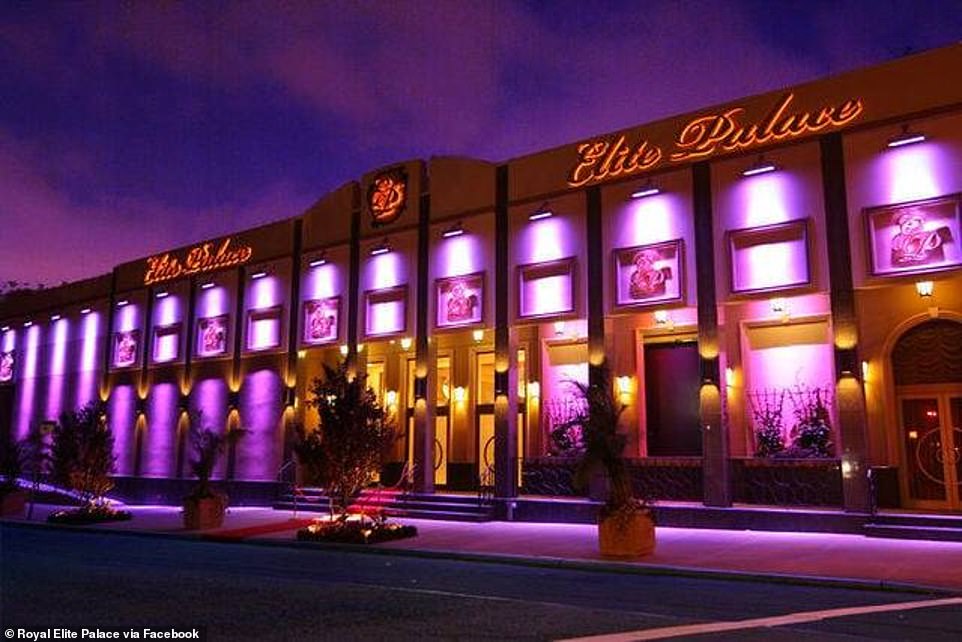 Mayor Bill de Blasio warned of potential new lockdowns in neighborhoods with surges at a press conference on Friday, saying: ‘It’s something we have to address with a very aggressive public health effort right away.’

De Blasio said that the lockdowns could include the closure of schools in affected areas – throwing yet another wrench into the city’s disastrous road to reopening for in-person classes.

New York City public schools began welcoming students back in the classroom on a rolling basis earlier this month, despite concerns from parents and educators.

At least 150 district employees have already tested positive for the virus, including 108 who came in contact with infected colleagues, according to the New York Post.

The city’s Department of Education has refused to disclose the total number of teachers and administrators who have been quarantined for 14 days since returning to school buildings on September 8, but the Post came up with its estimate based on reports from teachers themselves.

On Sunday, a union representing more than 6,4000 educators in New York City declared a unanimous vote of ‘no confidence’ in de Blasio and NYC Schools Chancellor Richard Carranza and demanded that they hand over control of the nation’s largest school district to the state.

The stunning vote from the Council of School Supervisors and Administrators came two days before schools are set to resume in-person learning for students in grades K through 8 on Tuesday.

The union ripped into de Blasio and Carranza’s ‘failure to lead New York City through a safe and successful reopening of schools’ and demanded that they hand over control of the district to state officials.

‘CSA calls on Mayor de Blasio to cede mayoral control of the Department of Education for the remainder of this health crisis and for Mayor de Blasio and Chancellor Carranza to seek the immediate intervention of the New York State Education Department,’ the union said in a statement. 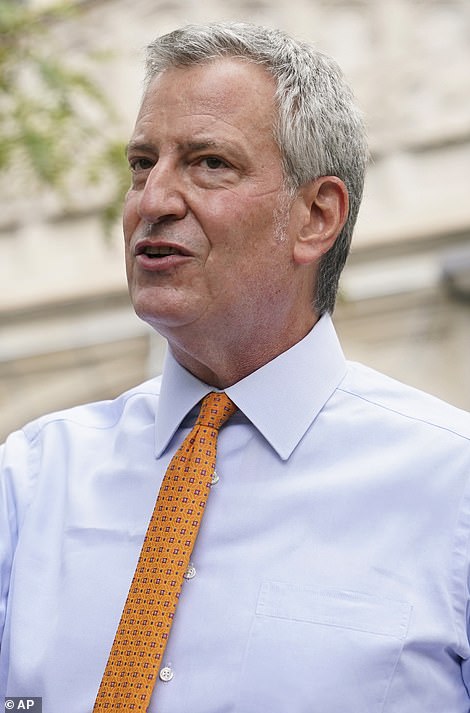 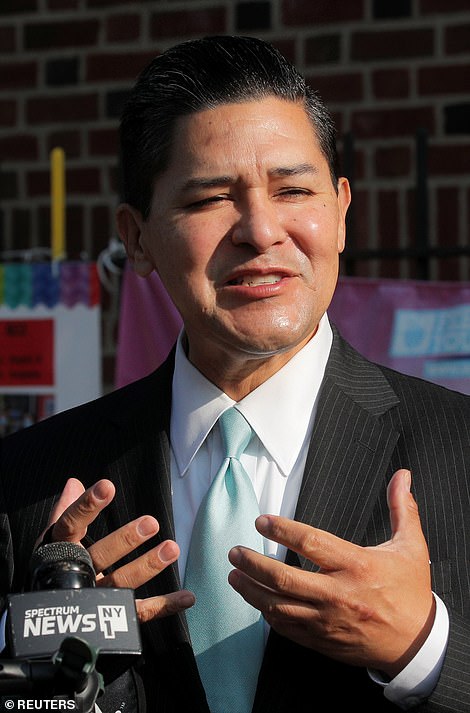 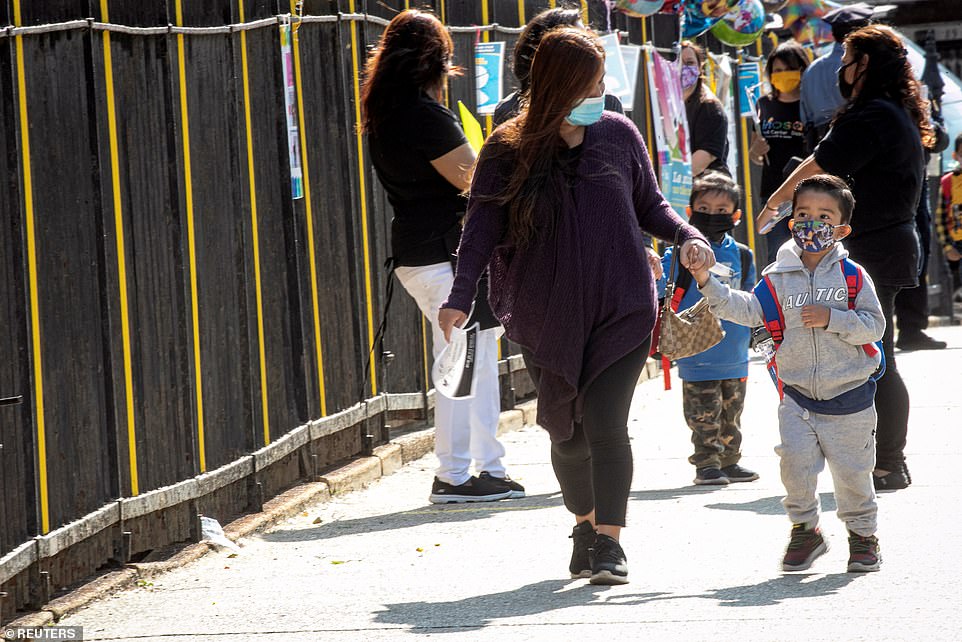 The stunning vote from the Council of School Supervisors and Administrators, which represents more than 6,400 education leaders in the Big Apple, came two days before schools are set to resume in-person learning for students in grades K through 8 on Tuesday. Pictured: Children are greeted on their first day of pre-school in Queens on September 21