AUSTIN – Since a deadly winter storm hit Texas earlier this month Governor Greg Abbott has repeatedly heaped criticism on ERCOT, the operator of the state’s electric grid, claiming the entity was woefully unprepared for the dangerous weather that has killed a still-untold number of people.

But an analysis of state campaign finance records by the KSAT 12 Defenders shows three current members of ERCOT’s board have contributed thousands to Abbott’s campaigns, with some of the funds dating back to his days as Texas Attorney General.

Lori Cobos and DeAnn Walker, two Abbott appointees who sit on ERCOT’s board due to their respective positions with the state, are listed among the governor’s lengthy list of political donors.

Walker, the chair of the Public Utility Commission of Texas and a former senior policy advisor to Abbott, contributed $7,620 to Texans for Greg Abbott from 2009 to 2015, state campaign records show. In 2017, Abbott appointed her to lead the PUC, where she makes a $200,000 salary.

Board member Mark Carpenter, a senior vice president with Dallas-based Oncor Electric Delivery, has contributed $10,000 to Texans for Greg Abbott, Abbott’s campaign war chest, since October 2018. He was not appointed by Abbott and did not return a call for comment.

Carpenter, Cobos and Walker are three of 10 remaining ERCOT board members after the five others — all of whom live out of state — resigned this week. 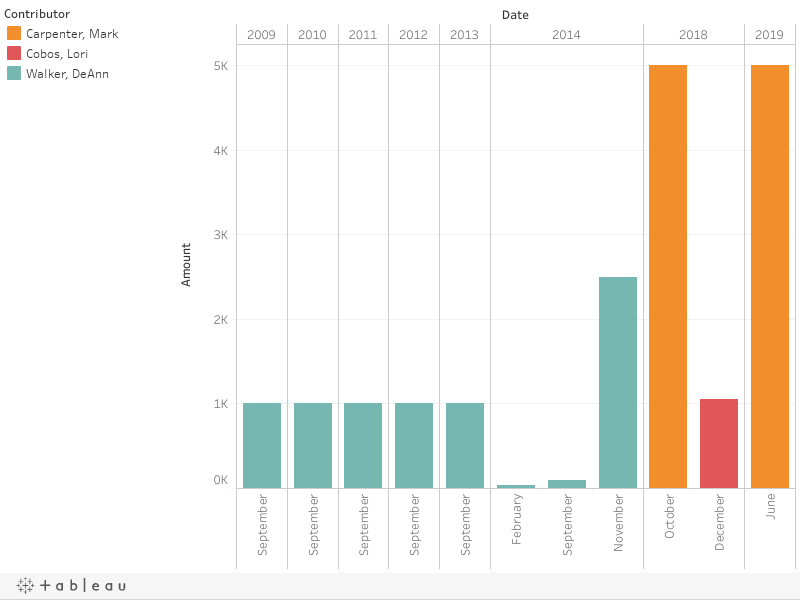 According to its website, OPUC represents the interests of residential and small commercial consumers, as a class, in utility proceedings in Texas.

After the Defenders reached out to Cobos seeking comment Tuesday, Jon Oliver, an OPUC spokesperson, called back and said he was unaware of any campaign contributions made to Abbott.

Oliver told KSAT that he was also unaware of any recent criticism levied toward ERCOT by Abbott.

The Defenders sent Oliver quotes from a Feb. 18 press conference during which Abbott said, “ERCOT failed on each of these measures that they said they had undertaken. Texans deserve answers about why these shortfalls occurred and how they are going to be corrected, and Texans will get those answers.”

Neither Cobos or the spokesperson ended up providing a statement for this story.

Walker, a non-voting member of ERCOT’s board, did not respond to a request for comment Tuesday.

A PUC spokesman instead sent the following statement:

Dillon, responding on Chairman Walker’s behalf as she’s still fully engaged in issues related to the winter storm related grid event. That said, she fully supports Governor Abbott’s decision to declare the grid event an emergency item for the Legislature’s attention and is fully committed, along with her fellow commissioners, to engaging in the legislative inquiry on the way to understanding what factors collided with a natural disaster to cause the outages.

The PUC has largely avoided blame for last week’s power issues, so far, despite providing oversight to ERCOT.

“One of the things that contributors are buying when they are contributing to a public official is access. And what you want to be able to do is have the ear of the lawmakers,” said Andrew Wheat of Texans for Public Justice, an Austin non-profit that tracks money in Texas politics.

The comments came during an appearance on Fox News.

“We’re talking about a historic blackout in the state of Texas, that affected millions of people’s lives, some in very dangerous ways,” said Wheat.

Energy officials have repeatedly said that the state’s natural gas supply was also hindered by the storm, in large part because energy plants did not have properly winterized equipment.

A report from Texans for Public Justice released this week found that Abbott raised more than $87 million in campaign contributions from the start of 2017 through the end of last year.

The oil and gas industry was Abbott’s top contributor, accounting for 19% of all funds raised, according to the report.

“The state of Texas imposes no limits on how much money you can give to your local representative, your senator, your governor,” said Wheat.

A bill proposed by San Antonio Republican state Rep. Lyle Larson in 2017 would have prohibited the governor from appointing a political donor to a position if he or she had contributed more than $2,500 in a year.

The “pay for play” proposal was passed by the full House but was killed in Lt. Gov. Dan Patrick’s Senate. Had the bill passed, Walker would not be running the PUC.

A spokesperson for Abbott told the Defenders via email, “Governor Abbott has made the reform of ERCOT an emergency item and has assured the public we will not leave this session without reforming the entity.”

The Texas House Committee on State Affairs is scheduled to hold a joint hearing Thursday morning with the House Energy Resources Committee to examine what led to statewide electrical blackouts.

Officials with ERCOT, which ordered local utility companies to shed load from the power grid as energy demand exceeded supply, are expected to answer questions during the hearing.

Texas Ethics Commission records, however, show that three of the 13 representatives on the House Committee on State Affairs have accepted contributions from ERCOT board member Clifton Karnei.

Among the state lawmakers Karnei has contributed to are representatives Shelby Slawson, Phil King and Matt Shaheen, all Republican members of the committee now charged with investigating ERCOT.

Of the trio, King received the most contributions from Karnei by far: five between 2004 and 2016 totaling $475, according to TEC records.

“We shouldn’t be sure that there’s going to be significant reform and regular citizens have to be pressuring their lawmakers, pressuring their state officials so that our voice gets heard as well as those people who are essentially wining and dining and giving money to the politicians,” said Wheat, who added that the contributions are likely small compared to those some politicians receive from energy executives and energy-backed PACs.

King, Slawson and Shaheen did not respond to calls and emails seeking comment for this story.

Rep. Chris Paddie, chair of the state affairs committee, also did not respond to calls and an email seeking comment.

Other ERCOT board members are listed in TEC records as having contributed to several energy-related PACs.

Copyright 2021 by KSAT – All rights reserved.