With just hours until Woods is slated to die, his attorneys are petitioning the US Supreme Court to block the execution, citing concerns about the method by which he is to be executed.

In a phone interview from William C. Holman Correctional Facility in Escambia County, Spencer told CNN that he alone fatally shot the three officers in 2004 when they stormed the crack house where he was sleeping. A fourth officer was shot but survived.

Convicted of capital murder in 2005, Woods will die by lethal injection at 6 p.m. (7 p.m. ET) at Holman prison, about an hour’s drive northeast of Mobile, unless he is granted a stay or clemency.

Activists, including Martin Luther King III, Bart Starr Jr., and Woods’ attorneys, have asked Gov. Kay Ivey to commute his sentence, but in a Wednesday statement, state Attorney General Steve Marshall called Woods’ punishment just. He took issue with those who say Woods is innocent or that he surrendered to police during the June 2004 drug raid.

“The falsehoods are the descriptors ‘surrendered’ and ‘innocent’: Neither apply whatsoever to Nathaniel Woods, whose actions directly caused the deaths of three policemen and injury to another,” the statement said. “Justice is set to be carried out tomorrow. The only injustice in the case of Nathaniel Woods is that which was inflicted on those four policemen that terrible day.”

Ivey’s office told CNN she will have no comment until a decision is made.

Speaking on the phone from death row at Holman prison, Spencer said that on the night of the killings he and Woods had already had a run-in with two police officers. He decided to pop a pill with a Bud Light so he could get some sleep, he said. He and Woods planned to go home once the officers got off of their shifts because they didn’t want to run into them again, he said.

“When I woke up I had the chopper on my lap,” he said, using slang for the SKS rifle authorities say he used to kill the officers. “When I got up, I got up with the rifle. I’m in a crack house. We sell dope. This is what we do. You always have to have your gun on you at the ready if you’re inside that f***ing apartment.”

Spencer heard fumbling around in another room. He looked out the window and saw police cars, but he thought the officers were outside, he said. 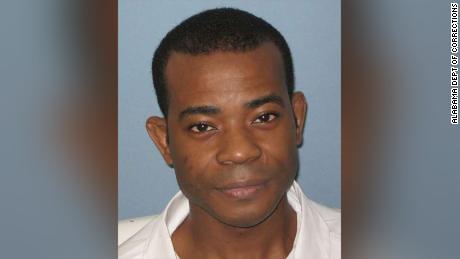 He emerged from the bedroom, he said, as Woods walked out of the kitchen with a knot on his head, holding his eyes. It wasn’t clear what was happening, he said, but then he saw movement out of the corner of his eye.

“When I looked to the side, there was two police officers trying to train their guns on me so I opened fire with the f***ing rifle. I wasn’t trying to get shot, period. I got a rifle in my hand. They’re going to shoot me,” he said.

He didn’t care that the men in the house were policemen, he said: “You point a gun at me, bitch, I’m fixing to shoot.”

“When I opened fire, Nate jumped as if he was getting shot, you understand? And once he seen he wasn’t getting shot, when I kept firing, that n***a took off,” Spencer told CNN.

When Spencer was first taken into custody, he said, he clammed up but eventually told investigators that Woods was not involved.

“I told them Nate didn’t shoot nobody. Nate ran. Nate didn’t even have a f***ing gun.” he said.

Spencer, who had a chance to hang out and reminisce with Woods on Saturday, considers Woods a brother, he said.

“Nate is a good guy. Nate ain’t no killer. The reason Nate was down there in the dope house with us is because he needed money,” Spencer said, adding that Woods had to be supervised because he was so soft-hearted he’d give drugs away for free.

Prosecutor: Woods is not innocent

On June 17, 2004, Birmingham police officers Charles Bennett, Harley Chisholm III, Carlos Owen and Michael Collins went to the apartment to arrest Woods, Marshall said in a letter to Ivey this week. A source had told officers that Woods and Spencer were armed and dealing crack to at least 100 customers a day, the prosecutor said.

Woods had threatened Owen, who had arrested him as a teenager, that morning, he said. Upon learning Woods had a misdemeanor assault warrant, the four officers returned to the apartment and told Woods to come outside, Marshall wrote.

“If you come in here, we’ll f**k you up,” Marshall quoted Woods as saying.

Chisholm went to the back and showed the warrant to Woods, who ran into the apartment, and the officers gave chase. Woods surrendered and asked the officers not to Mace him, the letter said.

Collins went outside and heard gunfire. Spencer shot Chisholm as he tried to retreat, Marshall said, and when Woods tried to escape, he saw Collins and said, “There’s someone else. We got another one right here,” and Spencer opened fire on Collins, who took a bullet in the thigh as he took cover and called for backup, the prosecutor said.

When help arrived, Bennett was found outside the front door, shot in the head, and Chisholm and Owen were inside. They had been shot in the back, through their bulletproof vests, Marshall wrote. All three were dead.

Investigators found Spencer in a neighbor’s attic, and Woods “was found sitting on a nearby porch, apparently ‘very relaxed’ and carrying two .22 caliber bullets in his pocket,” his letter said.

“Although Woods was not the shooter, he was hardly an innocent bystander,” Marshall wrote, explaining that Woods allegedly bragged about the shootings, threatened a sheriff’s deputy and composed drawings and songs boasting of the killings.

In one song, Woods riffed on a Dr. Dre song, “Haven’t you ever heard of a killa/I drop pigs like Kerry Spencer,” Marshall alleged.

Based in part on the testimony of 39 witnesses, Woods was convicted on four capital murder counts: three counts of intentionally killing a police officer in the line of duty and one count of killing two or more people while pursuant to a scheme or course of conduct. A jury voted 10-2 in favor of the death penalty.

Pleas to the Alabama governor

Spencer’s jailhouse interview came a day after the death row inmate wrote a letter from prison in which he said, “Nathaniel Woods is 100% innocent. I know this to be a fact because I’m the person that shot and killed all three of the officers.”

He closed by writing, “Don’t allow another innocent man to be executed if you can do something to put a stop to it. This is my most fervent prayer.”

Spencer has a federal appeal pending in the Northern District of Alabama.

Woods’ relatives and supporters proclaimed his innocence outside the Capitol in Montgomery on Wednesday. According to AL.com, his sister insisted he had nothing to do with the murders.

“We do feel really bad for what happened that day. We don’t wish that on anyone, for their family to have to deal with that. It was very unfortunate that the shooter did what he did. But the main point is that Nathaniel had no parts in those actions of another man, Kerry Spencer,” Pamela Woods told the news outlet.

In Martin Luther King III’s letter, the son of the civil rights icon pleaded with Ivey to use her power to stop the execution of “a man who is very likely innocent.”

“Killing this African American man, whose case appears to have been strongly mishandled by the courts, could produce an irreversible injustice,” he wrote.

Bart Starr Jr., the son of the late NFL Hall of Fame quarterback, has also advocated for mercy in Woods’ case, telling CNN affiliate WBRC that while the shootings were tragic, executing Woods would amount to another tragedy.

“Simply being at the wrong place where someone else shows up and then starts firing at police officers is not a reason to assign culpability to someone else,” he told the station.

Relatives of two of the slain officers, Owen and Bennett, have declined comment, while Chisolm’s family has not responded to CNN’s request for comment.

Woods’ attorneys have said he was represented by a court-appointed lawyer who had never handled a capital case, conducted an inadequate investigation and failed to advise him properly about taking a plea deal that was offered.

The US Supreme Court turned down Woods’ appeal last year. Marshall has said there is no evidence Woods was ever offered a plea deal, and former District Attorney David Barber, who prosecuted Woods, has submitted an affidavit saying he has no knowledge of any proffered deal.