Latest News
Home /Students are leaving personal thank-you notes next to Elizabeth Warrens photo at Harvard Law after she ended presidential run
So after news broke Thursday of Warren’s withdrawal, students started sticking post-it notes with personal thank-you messages around her portrait.
Her photo is one of over 180 black and white portraits of past professors that line the first and second floors of Harvard Law School’s Wasserstein Hall, according Linda Grant, Assistant Director and Managing Editor for Digital/Print Publications at Harvard Law.

Chris Volcy, a second year law student, told CNN she got inspired to post a note because she wanted to do something.

“During the day, it was obvious to me that people would walk by her (Warren’s) portrait and be sad,” she said.

As the news began circulating, Volcy and a friend ran to the school store, bought some post-it notes and wrote the first messages underneath the portrait of Warren, who was a visiting professor at Harvard in 1992 and later took a permanent position at the college from 1995 to 2012.

“HLS humans, let’s make this day slightly less [miserable] and tell Elizabeth Warren how much we love and respect her,” she wrote on Facebook.

It didn’t take long for Volcy’s idea to take off.

“I canvassed for you in 2012 and am so inspired by your integrity + tenacity,” one of the notes said. “We don’t deserve you but we’ll keep fighting until we do.” 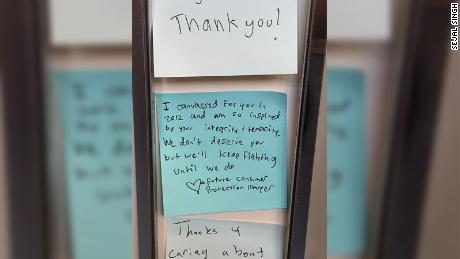 Another note said, “From one girl from Oklahoma + the ragged edge of the lower middle class to another, thank you. Please never stop fighting.” 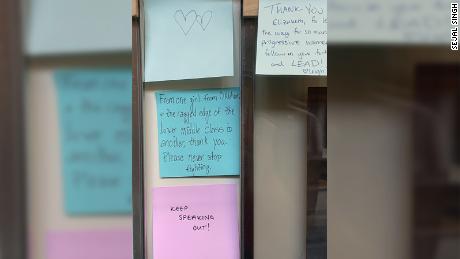 Sejal Singh, a third year law student and former Warren campaign staffer, told CNN she was really moved by the spontaneity of her fellow peers.

“Senator Warren inspired a generation of young people to fight for our values, and last night she told people to keep picking righteous fights — and I know we will,” Singh said. 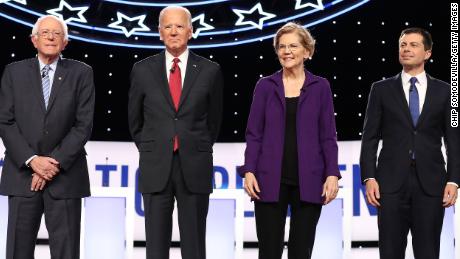 Volcy said she continues to choke up when she thinks about Warren’s “pinky promise” tradition with young girls. Warren linked pinkies with girls she met on the campaign trail as a way to convey that running for president is something girls do, too. She said she started doing the pinky promises because she wanted to “make something count every single day” as she tried to win the US Senate race. No matter how badly the day went, she would go home and count up the tally of pinky promises she made that day.

“I feel like this is our pinky promise to her that we’re gonna keep fighting,” Volcy said of the post-it thank yous.

An aide for Warren confirmed she’s aware of the post-it notes, which are multiplying, as pieces of paper pour around other professors’ photos on the wall. Photos of the collage’s growth can be seen on Twitter under #ThankYouWarren.
Original Source