Cillizza: Fill us in. What is happening here? Cuomo and Trump are facing off over who gets access to DMV records? Why?

Alvarez: To understand what’s happening now, we have to go back to last summer when Cuomo signed the “Green Light Law.” That law, which took effect in December, allows undocumented immigrants in New York to apply for a driver’s license.

Now, New York is not the first state to pass a law allowing undocumented immigrants to obtain a license. The key here is that the law also barred the Department of Homeland Security’s immigration agencies, including Immigration and Customs Enforcement and Customs and Border Protection, from accessing New York’s Department of Motor Vehicles database.

DHS uses those databases for a host of reasons that extend beyond immigration enforcement. So beyond the law supporting undocumented immigrants, it also, DHS argues, interferes with its security mission — and that, it seems, was the last straw.

Cillizza: Why does the Trump administration even care about getting access to DMV records?

Alvarez: Acting Homeland Security Secretary Chad Wolf told CNN last week the DMV database gives the department insight into whether a trusted traveler applicant has a DUI or another aggregated traffic offense — information he says is no longer available. 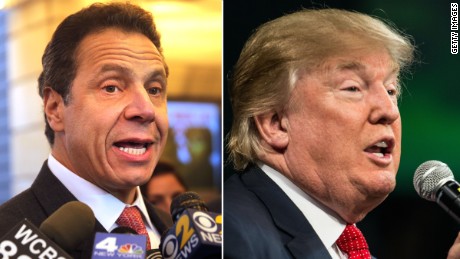 Only after there’s a conviction does information generally get transferred to other law enforcement databases that DHS still has access to, a senior CBP official told congressional staff this week.

Bottom line: DHS is arguing DMV records are important for vetting and law enforcement purposes, while critics say the administration is retaliating against the state for its sanctuary law.

Cillizza: Was the “Green Light Law” controversial when it passed?

Alvarez: It was. Our colleagues reported last June that the Senate approved the Green Light Bill with 33 votes to 29, and the result was met with cheers and shouts from the gallery. But the law also faced legal challenges by county clerks that were rejected by federal judges.
DHS also expressed concerns when it took effect. The law will “protect criminals at the expense of the safety and security of law-abiding New York residents,” the department’s spokesperson said in a tweet.

Cillizza: What has Cuomo said he’s willing to do?

Alvarez: On Wednesday, Cuomo said the state will give federal authorities access to the DMV database specifically for those applying for the Trusted Traveler Program, while stressing that he still sees this as a political ploy.

“I will give them the DMV database for Trusted Traveler. These are people who go for an in-person federal interview with all sorts of background information. So it’s pure politics and that is what I am going to say to the President tomorrow,” Cuomo told local radio host Jay Oliver Wednesday morning.

There still doesn’t seem to be much communication between New York and DHS, however. A DHS spokesperson told CNN in a statement Wednesday that “the Department has not yet received a proposal from the State of New York. We are only aware of media reports at this time.”

Cillizza: Finish this sentence: “The Trump-Cuomo Global Entry fight will end with ________.”

Alvarez: … maybe with some access to DMV records for Trusted Traveler Programs applicants, but who knows!