When Harris introduced Biden to the sound of a local marching band in Detroit, Biden bound on stage and hugged Harris. The two, joined by Michigan Gov. Gretchen Whitmer and New Jersey Sen. Cory Booker, held their hands in the air together.

The Biden-Harris relationship was tested during a fiery primary campaign, especially when the California senator pointedly went after the former vice president for his decades-old fight against busing to desegregate schools and his comments about his ability to work with segregationist senators.

Still, aides and advisers say their relationship over the last year — even with the tense moments — has also been privately punctuated by funny impromptu run-ins, warm conversations over the phone and a deep admiration for each other. The depth of that relationship has led to speculation that Harris could be a top pick to be Biden’s running mate, should the former vice president win the Democratic nomination.

Their bond, Harris acknowledged on Monday, is centered on one person: Beau Biden.

The former vice president has been open about the pain that his son’s death in 2015 to brain cancer has caused him, referring to his late son as “his soul” and often relating the tragedy he felt with pain that voters feel, too.

But Harris was close with Beau Biden, too. The former vice president’s son served as attorney general of Delaware at the same time that Harris held the same job in California. The two grew close working on how to take on national banks during the foreclosure crisis in the 2000s.

“I got to know Joe through Beau,” Harris said, describing their bond as “such a special relationship between a father and his son.”

“He spoke with so much love about the father that raised the man who he was,” Harris said of Beau. “I know Joe. And that is why I am supporting him.”

Harris, in her pre-campaign memoir “The Truths We Hold,” referred to Beau Biden as “an incredible friend and colleague” who had the “principle and courage” to take on banks that were largely organized in Delaware.

“There were periods, when I was taking heat, when Beau and I talked every day, sometimes multiple times a day,” Harris write. “We had each other’s backs.”

Harris continued to remember Beau, even after his death. She marked the anniversary of his passing during the presidential campaign, tweeting that she was thinking of “the entire Biden family today” on May 30.

“Four years after his passing, I still miss him,” she wrote.

Despite that history, Harris’ relationship with Joe Biden was tried by the Democratic primary, when they became rivals and most notably when the California senator used the former vice president as her primary foil in the first primary debate.

“I do not believe you are a racist,” Harris said on the stage as a stone-faced Biden looked straight ahead. “But I also believe and it’s personal and it was hurtful to hear you talk about the reputations of two United States senators who is built their reputations and careers on the segregation of race in this country.”

Biden stood silently as Harris went on to attack Biden’s opposition to the federal government mandating busing to integrate schools and making it personal: “That little girl was me,” she said, noting that she benefited from bussing.

Biden hit back carefully, telling the audience that her comment was a “mischaracterization of my position.”

But the attack represented a low point in the duo’s relationship, even if it helped Harris — for a short time — rocket in the polls afterward.

The depth of the injury that moment caused to the pair’s friendship would not be known until Biden, in an interview with CNN later that summer, used the ties Harris had with his late son to explain why he did not expect the senator to come after him so aggressively.

Biden’s response to the critique — which eventually hurt Harris after she was unable to fully explain the differences she had with Biden on busing — led some Harris staffers to regret that the attack.

“It is a painful comment,” a former senior Harris campaign adviser said. “Not painful in the ‘how dare he way’ — painful in showing it must have really hurt him … And you don’t ever want (an attack) to land that in that way.”

The adviser, who made clear that they were not speaking for Harris, added: “From an operative perspective, I don’t know if it was worth it.”

The pair’s relationship, though, recovered quickly.

Aides said that the two would warmly interact backstage at events, even weeks after the first debate, and that they quickly moved beyond that tense moment.

“Go easy on me, kid,” Biden said at the start of the CNN debate in Detroit, a moment of levity a month after her busing attack. 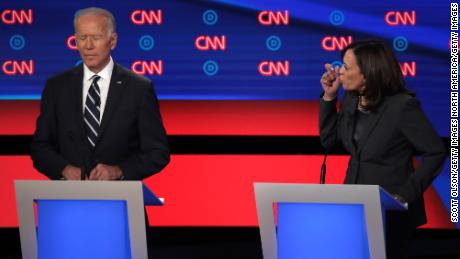 One adviser said that, even after the moment, Biden and Harris would speak “often” by phone. And that when Harris dropped out, the phone call she had with Biden was “the longest of any of the candidates who called her.”

Biden, too, has acknowledged that affinity, and has noted he didn’t want to let their rift hang over their current relationship.

“I’m not good at keeping hard feelings,” Biden said in December when asked if the June debate would impact their rapport.

Even though it was common for candidates to run in to each other on the campaign trail, it also seemed that Biden and Harris came across each other more than most.

The two saw each other on a Washington, DC, street corner in December 2018, right before the campaign kicked off in earnest.

“She was driving in a car and she saw the vice president walking and she said, ‘Hey Joe,'” recalled Lily Adams, a Harris aide who was with the senator at the time. “He ran over, she jumped out of the car.”

The duo also ran into each other on the Amtrak in February 2019, after Harris had declared her candidacy and months before Biden officially entered the race.

“Can’t take Amtrak without running into its most frequent traveler,” Kirsten Allen, a Harris aide, tweeted at the time.

Harris is far from the first politician who Biden has not allowed an attack to hang over their relationship. Like many politicians of his generation, the former vice president has dealt with political attacks from a range of opponents-turned-friends — including from Barack Obama during the 2008 primary.

“If you are someone like Joe Biden who has been in electoral politics as long as he has, you have to keep a short memory. He wouldn’t be as successful as he has been if you held grudges,” said Ian Sams, Harris’ national press secretary during the 2020 campaign. “I am sure that Vice President Biden has forgiven harsher critics throughout his career than Kamala Harris.”

But with Biden and Harris, there is also a mutually beneficial reason to move on: The former vice president needs a younger running mate and Harris would clearly be open to the position.

“She loves the Vice President,” said Bakari Sellers, a high-profile Harris supporter who is now backing Biden. “That interaction that they had in Miami is just a small blip on the timeline when it comes to their relationship.”

Sellers, a CNN analyst, said while their relationship started with Beau, it has grown from there and should be a key factor when it comes time for Biden to consider who to pick for a running made.

Sellers, who unabashedly hopes Biden selects Harris, added that their debate clash in June may be a key reason Biden picks the California senator.