Rep. Mac Thornberry, a Texas Republican who is the ranking member of the House committee, did not mention Trump by name but voiced strong opposition to the diverting of money from various Pentagon accounts for border wall construction, asserting the move is “contrary to Congress’s constitutional authority.”

“The re-programming announced today is contrary to Congress’s constitutional authority, and I believe that it requires Congress to take action. I will be working with my colleagues to determine the appropriate steps to take,” he said in a statement responding to the Defense Department’s announcement.

“Congress has the constitutional responsibility to determine how defense dollars are spent. We take the Pentagon’s recommendations seriously during our deliberations, but the final decisions are contained in the bills passed by Congress and signed into law,” Thornberry added.

The Pentagon defended the decision Thursday, insisting it is consistent with the directive issued by the President.

“The Department of Defense is committed to supporting the Department of Homeland Security’s efforts to secure the southern border by constructing fences and roads and installing lighting to block drug smuggling corridors,” DoD spokesperson LTC Chris Mitchell said in a statement.

“Consistent with the President’s April 4, 2018, direction to the Secretary of Defense, DoD used its statutory authority to provide support that aids in blocking drug-smuggling corridors across international boundaries of the United States,” Mitchell added.

But the Defense Department’s announcement has prompted bipartisan criticism, with Democrats accusing Trump of stealing money from the military he has repeatedly taken credit for rebuilding in order to fulfill a campaign promise.

“Today’s reprogramming request confirms once again that the President is obsessed with fulfilling a campaign promise at the expense of our national security. This Administration has already stolen billions from the Department of Defense in order to begin building the President’s vanity wall and today they are doubling down on bad policy,” House Armed Services Committee chairman Rep. Adam Smith, a Democrat from Washington, said in a statement.

“The President loves to take credit for ‘rebuilding’ the military, but today’s reprogramming decision does the exact opposite — it will prevent the acquisition of critical ships, vehicles, and aircraft,” he added.

Although the White House has asked for less money for the wall in their formal budget request to Congress, the administration is increasingly relying on Pentagon funds to meet its goal of constructing additional barriers on the border.

The Trump administration has argued that it does not need congressional approval to redirect military funds to the border wall.

And Pentagon officials reiterated that claim Thursday after formally announcing Defense Secretary Mark Esper’s decision to accept the Department of Homeland Security’s request for assistance “in blocking drug smuggling corridors on federally controlled land along the southwest border of the United States.”

“The Department has the authority to reprogram funding within its budget. There is a general transfer authority of up to $4 billion and there is a special transfer authority up to $2 billion. It has to be a higher priority and the secretary has determined this is a higher priority,” Deputy Assistant Secretary of Defense for Homeland Defense and Integration, Robert Salesses, told reporters.

In January, DHS formally requested assistance from the Defense Department, asking for $5.5 billion to help build 271 miles of the border wall, Salesses added. “What the Department has determined, the Secretary has determined is that we will build 177 miles … So this did not meet the totality of their request,” he said. 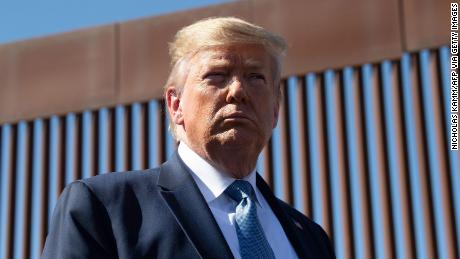 The announcement comes as Trump is also extending his national emergency on the US-Mexico border for another year, according to a notice submitted to the Federal Register on Thursday.

Trump declared a national emergency nearly a year ago in order to secure funding to build his signature wall.

The move paved the way for Trump to unlock billions of dollars in federal funds to construct additional barriers on the southern border, bypassing Congress after lawmakers refused to meet his multi-billion-dollar fund request.

This is the first time the White House has renewed the emergency, which it plans to extend “beyond” February.

As of February 7, the administration has completed construction of approximately 119 miles — the majority of which has been replacing old barrier with new, enhanced wall systems, according to US Customs and Border Protection. Trump said at his State of the Union address last week that he intends to complete “over 500 miles” by early 2021.

Court reverses own decision on…

Bloomberg says he will run…

Coronavirus outbreak: All the latest…