That has included a push in various states for policies such as enhanced signature matching, requirements for people to file an application before they receive a ballot and limits to when and where mail-in ballots will be counted — things election experts have said could lead to fewer votes being counted from groups that skew Democratic.

Meanwhile, the President has begun laying the groundwork for the doubt and suspicion he could cast on election results if counting mail-in ballots ultimately delays the declaration of a winner.

“I want to have the election. But I also don’t want to have to wait for three months and then find out that the ballots are all missing and the election doesn’t mean anything. That’s what’s going to happen,” Trump said Thursday at a news conference, during which he also called vote-by-mail a “disaster” and argued people should have to cast their votes in person.

“Mail-in ballots will lead to the greatest fraud,” he said, without evidence.

But some administration officials and Republican allies have expressed frustration at Trump’s rhetoric behind closed doors — acknowledging that mail-in voting will likely be necessary and perhaps even helpful for the President in some places.

“It’s not smart,” one senior administration official said of Trump’s comments, noting the likelihood that the pandemic will make voting in-person, at least in some areas, impossible. “When we are eventually forced to have mail-in ballots, it’s our people who won’t vote because they don’t trust the system.”

Arizona and Michigan are two key states that Republican National Committee and Trump campaign officials have expressed concern over holding in November. And the worry over Trump’s fight against mail-in voting extends beyond the presidential election; multiple Republican sources stressed how this could negatively affect down-ballot GOP candidates as well.

Fighting to shape the system 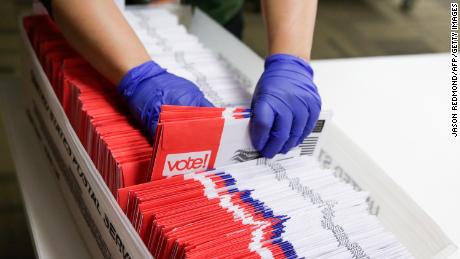 Trump’s campaign and the RNC have set aside $20 million for waging election-related battles, which have ranged from challenging individual states’ laws directly to battling Democratic groups that have themselves sued to open up voting options, according to a source familiar with the campaign’s election efforts. The Trump campaign pointed to Democrats, who they say have intervened in 18 states over mail-in voting laws, and argued they have simply stepped into those legal battles to defend “election integrity.”

Their effort has spanned at least 17 states and has focused primarily on preserving restrictions to mail-in ballots that they say protect against fraud, but that Democrats say ensure some voters will not get their ballots counted.

The source acknowledged some rule changes would likely offer an advantage to Trump’s rival, Joe Biden — specifically, the loosening of signature matching requirements and “ballot harvesting,” or the practice of allowing individuals, including political operatives, to collect large numbers of ballots and turn them in en masse.

The Trump campaign and the RNC have fought to retain tight signature matching rules, which require that the signature on a ballot match the a person’s signature on the voter registration rolls. An anti-fraud measure, some Democrats and voter advocacy groups argue it results in too many ballots being discarded.

Despite Trump’s rhetoric suggesting all mail-in voting will expose the country to the prospect of a fraudulent election result, the Trump campaign and Republican allies have been careful to specify that they do not oppose the overall concept of vote-by-mail policies. Instead, they have sought to draw a distinction between absentee voting and the expanded mail-in voting some states have proposed as a safer alternative to casting ballots at the polls during the pandemic.

But the voting methods are very similar, and experts have told CNN they are largely “the same thing.”

Tim Murtaugh, Trump campaign spokesman, cited examples of delays and issues with expanded mail-in voting in New York and New Jersey to argue the practice is too risky to roll out widely in November.

“It is now the stated goal of Democrats to eliminate protections for election integrity, such as universally mailing a ballot to every registered voter, whether they asked for one or not,” Murtaugh said in a statement to CNN. “They also want to eliminate signature matching and clear the way for ballot harvesting, which are also wide open opportunities for fraud.”

The campaign is not working to ban mail-in voting outright, but often fighting to shape the system in which it will occur.

In Pennsylvania — a state that campaign officials are banking on winning, but believe will be very close — the Trump campaign has sued the election boards of 67 counties over ways mail-in voting was conducted ahead of the June primary there, and it has demanded certain changes ahead of November, such as ending the practice of allowing voters to drop their ballots off at certified, unmonitored drop boxes in addition to traditional polling locations.
The campaign also asked Pennsylvania to stop election officials “from counting absentee and mail-in ballots that lack a secrecy envelope or contain on that envelope any text, mark or symbol which reveals the elector’s identity, political affiliation, or candidate preference,” according to court documents filed on June 29.

The lawsuit argued that the use of unmonitored drop-boxes created the opportunity for fraud and disenfranchisement because different counties advertised to voters the existence of their locations differently, and because it prevented political parties from having as much insight into the process. Proponents of the practice argue the boxes simply create more convenient locations for voters and reduce the burden on the Postal Service.

Pennsylvania used expanded mail-in voting practices in its June primary, and like other states that did the same this year, struggled to navigate the results. Pennsylvania Gov. Tom Wolf, a Democrat, extended the deadline for receiving and counting ballots in six large counties ahead of Election Day.

But an analysis by the Philadelphia Inquirer found that Pennsylvania voters who waited until three weeks or less before Election Day to apply for their ballots were less likely to get their ballot in than those who applied earlier; the analysis concluded 92,000 fewer votes were cast due to delays in processing applications, printing ballots and delivering mail.

A Democratic official who requested anonymity said Democratic groups are fighting in some states to allow ballots postmarked by Election Day to be counted, even if they arrive days after.

Republicans have claimed ballots should be received by Election Day to register — a policy, the Democratic official said, that disproportionately affects young people and people of color. Those are the groups that tend to send their votes in later, when mail delays and backlogs could prevent them from reaching election offices in time.

On a website detailing their joint efforts, the RNC and Trump campaign notes: “Receiving ballots after election day allows losing candidates to ‘go find’ enough late votes to change the outcome. Moreover, any system that allows late-arriving ballots is ripe for weeks of prolonged litigation, which undermines the confidence and legitimacy of the election.”

Trump’s team has also expressed concern about the shortened timeline mail-in voting could create. A source close to the campaign argued that if mail-in voting is expanded, “people would be voting without being an informed voter,” because in some places they could request and submit their ballot weeks before Election Day.

With the margins between the President and Biden razor-thin in a number of key states, the campaign is concerned that “people without full knowledge of what could come out in the election” would start to seal Trump’s fate before he had a chance to compete fully.

But one thing aides rarely cite as a potential problem with mail-in voting is foreign interference, although Trump has tried repeatedly to raise the specter of election meddling associated with vote-by-mail policies.

“This is going to be the greatest election disaster in history. And by the way, you guys like to talk about Russia and China and other places, they’ll be able to forge ballots, they’ll forge up, they’ll do whatever they have to do,” Trump said on Friday.

There is no evidence foreign governments would have any means of printing ballots, which have to be individually requested in most states and checked against voter registration files. 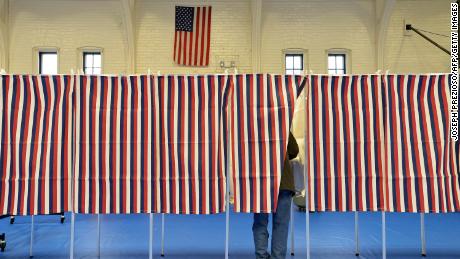 The campaign’s state-by-state legal slog has dovetailed with an effort by the White House to limit funding for vote-by-mail measures.

House Democrats included $3.6 billion for election-related activities — including the potential expansion of mail-in voting — in the stimulus proposal they passed in May. The money would have been aimed at helping states shape their elections ahead of November so voters can safely cast their ballots amid the pandemic.

But the White House and Senate Republicans negotiated a proposal, unveiled this week, that included zero dollars for the election. A White House official said funding for mail-in voting is currently a sticking point in negotiations that are already hitting larger snags over unemployment insurance and liability protections for employers who ask their workers to return to the job site with the virus not yet under control.

In the stimulus package Trump signed in March, Republicans and Democrats agreed to offer $400 million in federal grants for states to spend on changes needed to hold safe elections this November.

Democrats, however, wanted far more; their earlier proposal had requested $4 billion in such grants.

Many state officials have said they will need more funding to do things like train the number of people required to count the expected influx of mail-in ballots quickly and to make in-person polling places safe as well.

The delays and increased financial strain that have plagued the US Postal Service throughout the pandemic could also lend to the problems that may arise from expanded mail-in voting.

USPS has recently implemented new policies that workers blame for delivery delays of at least two days across the country — prompting fears that many ballots may not reach election offices in time if the problems aren’t corrected by November.
Original Source