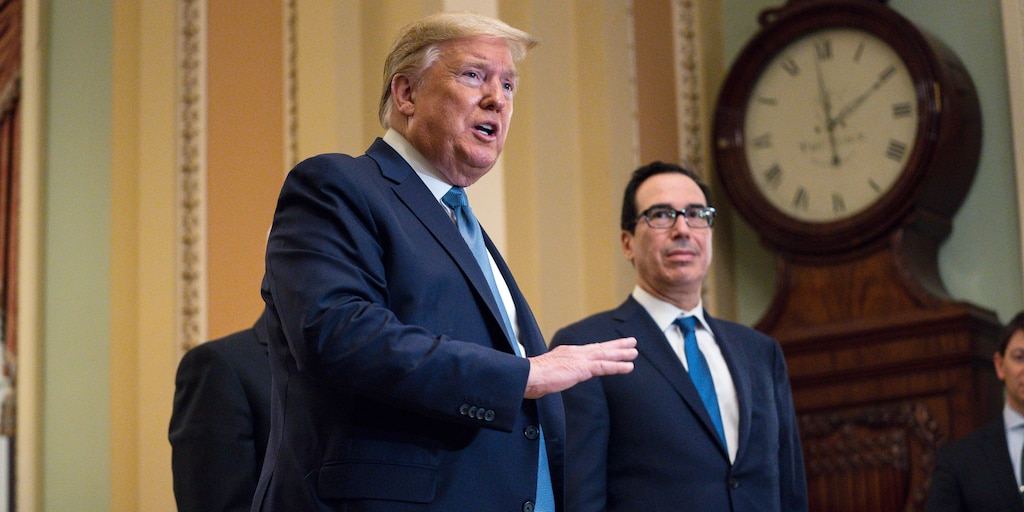 The Trump administration’s proposed stimulus package aiming to slash payroll taxes would surpass the size of President Obama’s stimulus legislation passed over a decade ago at the height of the financial crisis. It would also likely add close to another $1 trillion onto the federal debt.

At the heart of Trump’s plan is a suspension of taxes on employee wages that would last until the end of the year. Those are taxes used to finance Social Security, with employees and employers each paying 6.2% on their wages scaling up to $137,700. Then an additional 1.45% from the employee’s gross pay is used to fund Medicare.

Among other elements of the nascent package — which remains under negotiation in Congress — are an extension of paid sick leave for workers and additional unemployment benefits.

The Trump administration is also weighing a bailout package for industries hard hit by the coronavirus as Americans opt to stay home and cancel travel plans. Large gatherings like music festivals are also being canceled.

The payroll-tax cut alone would cost the government $807 billion if it were implemented from April 1 until December 31, according to the Penn Wharton Budget Model. Other estimates put the price tag as high as $950 billion, according to the Tax Foundation.

The other parts of the emerging package would likely put the full cost of Trump’s proposals above $1 trillion.

By contrast, the Obama stimulus bill — aimed at pulling the nation out of its worst economic downturn since the Great Depression — cost around $800 billion over several years.

The tax cut has been met with a cool reception among lawmakers on Capitol Hill. Democratic House Majority Leader Steny Hoyer called it a “nonstarter” on Wednesday, The New York Times reported. Republican Sen. Chuck Grassley, the head of the Senate Finance Committee, threw cold water on the idea and said it wasn’t needed at the moment.

Some economists support the payroll-tax cut and say it would also be a boost to employers who could use a financial cushion to weather the fallout from the coronavirus.

But others point out a payroll-tax cut would do little to immediately boost consumer spending as well as leave laid-off workers in the lurch if they’re not drawing a paycheck.

The federal deficit is forecasted to surpass $1 trillion this year for the first time since 2012. A Trump stimulus bill would likely push the federal deficit above $2 trillion, well past its previous record of $1.4 trillion over a decade ago during the recession.