The narrowing gap with Latinos is putting more pressure on Biden to hold or even expand his lead with White and older voters, two blocs with whom the Democrat has cut into Trump’s lead, allowing him to maintain an overall lead in national polling and crucial states, like Minnesota, Wisconsin and Michigan.

Asked why his numbers among Hispanic voters are as low as they are right now, Biden said on Monday that his number are much higher than Trump’s, but added, “But they gotta go higher.”

Some Democrats, concerned that Biden’s advantage with White voters could narrow, believe he needs to dial up his focus — and dedicate more resources — toward targeting the diverse array of Latino voters in key states like Florida, Nevada and Arizona that could tip the balance for the former vice president and win him the White House in November.

“Any movement of White swing voters regressing to the mean, or any downtick of support from White swing voters for Biden, and (his) not doing the work to continue to increase support and run up the score with Hispanic voters in these key states could amount to a closer election than we would be comfortable with,” said Stephanie Valencia, co-founder of EquisLabs and Barack Obama’s deputy Latino vote director in 2008.

The fight for Hispanic voters was on full display this week, with Trump courting voters in Nevada and Arizona as Biden headlined a Hispanic Heritage Month event in central Florida.

Trump and his campaign have made a concerted effort to right their messaging wrongs of four years ago and close the gap with Hispanic voters using a three-pronged approach: Tie Biden to the left wing of his party in an effort to win over immigrants from authoritarian socialist countries; promise economic growth and low taxes to the sizable pool of Hispanic Americans starting small businesses; and pledge to combat gang activity in big cities in an effort to win over older Hispanic voters. 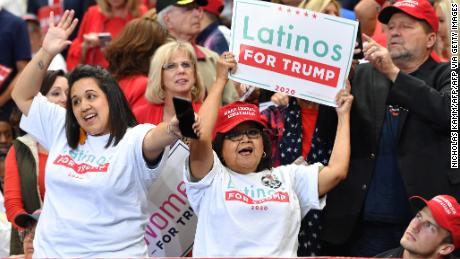 Much of this activity has flown under the national radar and comes packaged with a lighter touch than Trump delivers in his speeches and tweets. The candidate who began the 2016 campaign by calling undocumented Mexican immigrants “rapists” and oversaw a regime that separated migrant families at the US-Mexico border, has not — rhetorically or with policy — backed off his hardline approach. But his campaign is betting that Hispanic voters, especially those who don’t follow the news closely or haven’t been negatively impacted by his administration’s actions, will focus instead on his economic messaging and be scared off by the campaign’s false attacks on Biden.

“I have been in Republican politics for a long time and this is really the first presidential campaign where I have seen major investment into Latino outreach,” said Mercedes Schlapp, a top Trump operative who was born in Florida and is Cuban American. “Republicans for a long time really have been hesitant to break into the Latino community and black community and court that vote.”

This messaging, said top Democrats working in Latino communities, has made a difference for Trump. But the biggest impact, operatives said, was the fact that Trump seemingly dominated messaging in key states like Florida for months, with Biden ceding the floor to Trump.

Lorella Praeli, president of Community Change Action and Clinton’s national Latino vote director in 2016, said it was a “mistake” that Biden has not started his outreach earlier, but the mere fact that Biden’s outreach took time to ramp up should not dissuade the campaign from committing substantial resources now.

“We should not get cynical about the moment and the opportunity we have in front of us,” said Praeli. “In the last 50 days, you can persuade the electorate. … Should you have been making those inroads earlier? Yes. Is it too late? No. But don’t sleep on it now simply because you didn’t start earlier.”

Both Democratic and Republican strategists also argued that, on a range of issues, the Latino community — whether it’s Cuban Americans in South Florida, Puerto Ricans in Orlando, or Mexican immigrants in border states out West — should not be viewed as separate from the rest of the electorate.

Trump’s primary focus might be ginning up White resentment, they said, but he also taps into other unsavory instincts in the American voting public — especially among men.

“What appeals to Latino voters who are supporting Trump is the same thing that appeals to voters who support Trump,” said Sonja Diaz, founding executive director UCLA Luskin School of Public Affairs, a former policy counsel to Sen. Kamala Harris during the vice presidential candidate’s time as California attorney general.

“It’s likely that Latino males will support Trump in 2020 at higher rates than Latinas. And you see that generally in terms of the trends of White voters and White males in particular,” Diaz said. “I think that there’s something around masculinity and misogyny that is really galvanizing some voters who identify as men. And I don’t know that there is a cultural component to it. It’s just an American male phenomenon.” 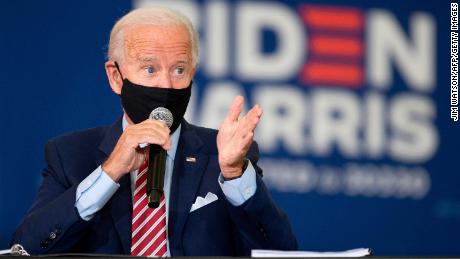 “The devastation that the community has seen both from a public health perspective and an economic perspective is one that has drastically impacted Latino voters in all of the battle ground states,” said Chavez Rodriguez. “The reality is over 25,000 Latinos have lost their lives as a result of Covid. The numbers didn’t have to be that high. … Those are the realities that I think Latinos are facing today.”

The campaign is also working to combat election disinformation, with organizers reporting that an array of wild, false conspiracy theories are being directed at Spanish-speaking voters, especially in battle ground Florida.

Rodriguez said that the campaign is “seeing voter suppression at a whole new level,” so while the Trump campaign is actively reaching out to Latino voters, others are working to “keep folks from actually engaging in a critical election that has a huge impact.”

“It is really disturbing that some of those tactics are being used,” she said

But even Democrats close to Biden concede that it took the campaign a long time — because of the spread of the coronavirus and the campaign’s money issues early in the general election — to commit the needed resources to Latino outreach.

Arizona Rep. Ruben Gallego, a Biden supporter and surrogate, said that he spoke to Biden about the initial lack of Hispanic outreach and the former vice president acknowledged that his team had been slow out of the gate.

“The Biden campaign would admit they were slow to get out to Latinos communities. It is not because they didn’t want to, it is because when they captured the nomination, the country had to shut down and they were broke, too,” Gallego said. But now, he added, “I have never seen this amount of money spent on Spanish media, ever, in any election.”

Gallego admitted that Trump’s messaging works with some voters, but said that his focus on socialism, crime and the economy is all overshadowed by the President’s disastrous handling of the coronavirus.

“You can’t talk about jobs when we have the highest rate of unemployment in the country right now,” Gallego said. “For the Latino community, when things go bad in the country, we are the first ones down the rabbit hole and the last ones out of the hole. That’s what is happening with coronavirus.”

Chuck Rocha, who led Sen. Bernie Sanders’ lauded Latino outreach efforts and since launched Nuestro PAC, which is now seeking to drive turnout in November, said Biden’s message isn’t the problem. From what he’s seen in focus groups, he said, it goes down well. His concern, though, is whether the information is being hammered home with enough resources.

“They like his message — when you tell them. His economic message resonates dramatically with Latinos,” Rocha said. “He helped rebuild the economy. They love that. That means that they feel he can rebuild after coronavirus. He’s talked about raising the minimum wage. He’s talking about getting the economy back up and rolling. But all they really ever knew about him is that he was Barack Obama’s vice president and they just don’t know him.”

The information gap, Rocha added, has been exploited by the Trump campaign — as seen on television, most prominently during the Republican National Convention, when Trump made a series of appeals to persuadable Latino voters.

Biden’s issues with the Latino vote are most acute in Florida, where about a third are typically conservative-leaning Cuban Americans. Trump’s attempts to portray Biden as a tool of the radical left might not resonate broadly, but in a state where so many Latino voters, especially older ones, are sensitive to even the whiff of socialism, Biden’s position as the de facto leader of an increasingly progressive Democratic Party has the potential turn off voters.

A Marist College poll released earlier this month found Biden and Trump tied at 48% among likely voters in Florida. The same poll found the President narrowly leading the former vice president among Latinos in the state, with Trump at 50% and Biden at 46%. Other polls, like a Monmouth University poll released this week found Biden with a substantial lead over Trump among Latino voters — 58% to 32%.

Despite the variability in polls among Hispanic voters, Republicans believe that those polls show Trump’s focus on socialism is working.

“Biden is kind of caught in the middle,” said Chris Hartline, a top aide to Republican Florida Sen. Rick Scott, the state’s former two-term governor. “Obviously he is, at least in tone and personality, more moderate. And probably on policy, as well. But he’s caught in the middle of wanting of trying to hold together the two sides of the Democratic Party.”

Biden, in an attempt to keep the party together, has worked closely with some of the Democratic leaders, like Sanders, a self-described democratic socialist, and Rep. Alexandria Ocasio-Cortez, who co-chaired a post-primary unity task for on climate. Hartline said it makes sense that Biden is not going to “denounce” some of the more progressive views in his party.

But, he added, “folks in South Florida recognize that and see what socialism has done in their countries. And they don’t want a president who is the leader of a party that is flirting with that sort of ideology.”

Biden and his campaign have mostly laughed off the socialism charges, when leveled against him personally, viewing them as self-evidently false. Valencia said that is probably the right strategy, especially in Florida, a TV-driven state with a diverse Latino population.

“We are gaining every day with Latino voters. It is pre-election, so there are a lot of undecided voters. But that is not a surprise or a controversy,” said Matt Barreto, a Biden pollster focused on Latinos. “Historically, those undecided voters are younger and more Democratic leaning and have voted for Democrats 2-to-1 in the past. … We are on track and will continue to go after every single Latino vote.”