Twitter has applied its first „manipulated media“ label to a video retweeted by President Donald Trump, as first reported by The Washington Post.

The tweet was originally shared by the White House’s head of social media, Dan Scavino, and it contains a video that appears to show the Democratic presidential candidate Joe Biden stumble during a speech and accidentally endorse President Donald Trump, saying, „We can only reelect Donald Trump.“

In reality, however, Biden went on to say: „We can only reelect Donald Trump if in fact we get engaged in this circular firing squad here. It’s got to be a positive campaign.“

Twitter announced its new manipulated-media policy last month, designed to combat deceptively edited content. The tag doesn’t seem entirely effective, however, as a Twitter representative told Business Insider the company was working to fix a glitch that meant people who searched for the tweet weren’t being shown the tag. The person said it was showing up in people’s timelines. The tag did not appear when Business Insider searched for the tweet. 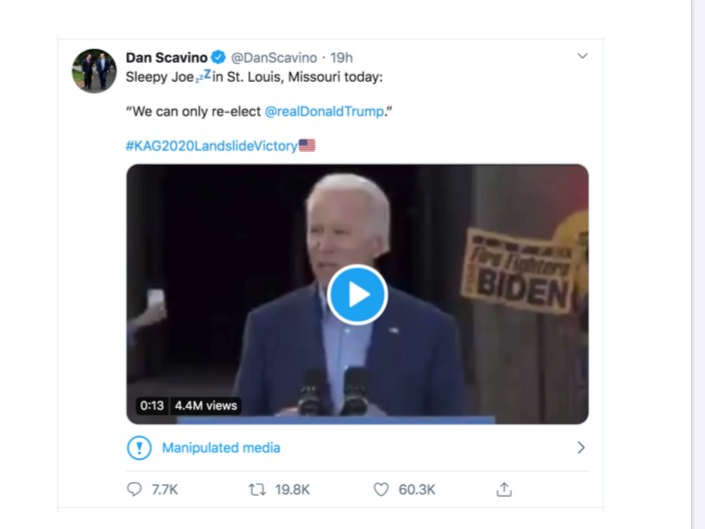 This is far from the first time Trump has shared a doctored video on social media. In February the president shared an edited video of House Speaker Nancy Pelosi tearing up a copy of his State of the Union speech. Last year he shared another video of Pelosi edited to make it look as if she were slurring her words.