Latest News
Home /With possible vaccine on the horizon, US is likely in last big surge of the Covid-19 pandemics toughest phase

“The months ahead are going to look better than the weeks ahead,” former US Food and Drug Administration commissioner Dr. Mark McClellan said at a Tuesday event hosted by Duke University.

“Things are going to start gradually getting better,” he said. “Won’t be past this for still months to come. But it will start getting better by early 2021,” he said, with the help of a vaccine.

But it also comes amid a scary time for the country. For at least 15 days straight, the US has reported more than 100,000 daily infections. About 76,830 people are hospitalized with the virus nationwide, according to the COVID Tracking Project. That’s the highest number since the pandemic’s start. And each day, hundreds of Americans continue to lose their battle against Covid-19, with at least eleven days this month topping a 1,000 daily death toll.

Experts have warned of a tough stretch ahead. Arkansas Gov. Asa Hutchinson said if the state’s numbers continue trekking at the same pace, “1,000 Arkansans could die of Covid-19 between now and Christmas.” Texas officials have deployed two mobile refrigerator trucks to the city of Amarillo while in another part of the state, health officials warn they’re preparing for the second half of the pandemic as the holidays near.

“If we don’t do the right things during the halftime to strategize and get our act together so we’re ready for the second half, we’re going to be overrun by our opponent and that’s Covid-19,” Dr. Umair Shah, the executive director of Harris County’s health department, told CNN. 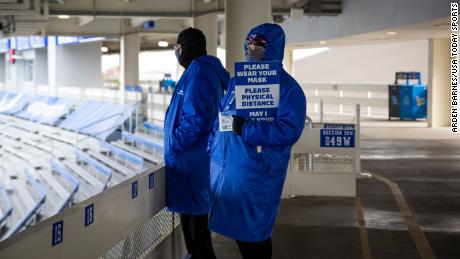 Illinois governor: We could save ‘thousands of lives’ with measures

As of early Wednesday morning, 47 states were reporting at least a 10% increase in new cases from the previous week, according to data from Johns Hopkins University. About six of those states had seen more than a 50% jump. Amid the crisis, more governors and local officials each day announce new measures to combat Covid-19 spread in their state’s communities.

Amid a record number of hospitalizations, Illinois Gov. J.B. Pritzker announced the state would be moving to “Tier 3 resurgence mitigations” starting Friday, saying he hopes by limiting “in-person interactions now” the state can avoid another stay-at-home order. Under the new restrictions, in-home gatherings are limited to household members and bars and restaurants can only offer outdoor service and close by 11 p.m.

“We will continue to see a rise in both hospitalizations and deaths from Covid-19 for weeks ahead because of the infections that have already happened,” the governor said. “But we can change our longer-term outcome. We can save potentially thousands of lives in the next few months if we make changes right now to stop this in its track.”

On Monday, a Stay-at-Home Advisory began in Chicago, where city officials also urged residents not to have guests in their homes, cancel traditional Thanksgiving celebrations and avoid traveling.

Similar measures have been announced across the US in the past days.

California’s governor also said this week he’s considering a curfew, after announcing that 40 counties were moving to a more restrictive tier in the state’s reopening plan, amid a surge of new infections.

In Maryland, the governor issuing an emergency order effective Friday that calls for all bars and restaurants to close between 10 p.m. and 6 a.m., except for carryout and delivery services.

“We are in a war right now,” Gov. Larry Hogan said. “And the virus is winning. Now, more than ever, I’m pleading with the people of our state to stand together, a while longer.”

As cases surge across the US, schools and universities are also navigating what their next steps should look like, especially following a holiday season that experts fear will further fuel the country’s rampant spread of the virus.

In Boston, Mayor Marty Walsh said the holidays are “especially high risk for college students who don’t live at home.”

Earlier this week, Connecticut Gov. Ned Lamont also issued guidance for out-of-state college students who were planning to return home to Connecticut for the holiday.

He said returning students should self-quarantine for 14 days before or after coming home, get tested for Covid-19 both before leaving school and after getting home, not attend parties or reunions and not quarantine with any elderly or at-risk family members.

“We can’t enforce this,” Lamont said. “I’m going to have to depend upon your good judgment … that you follow the protocols, you follow the quarantine and your follow the testing.”

A return to normal

Despite good news on the vaccine front, National Institutes of Health Director Dr. Francis Collins warns Americans not to “jump the gun.”

It’s “pretty amazing” that vaccine trials have reached this point so quickly, he said, adding it normally takes about eight years on average for a vaccine to be developed.

While the vaccines’ high efficacy rates should be encouraging, he said there are still several steps ahead before one is approved and becomes available.

“This is not going to be a rush job through the data,” he said. “They’re going to look very carefully to be sure that everything is in order with safety and with efficacy, then they will make a judgment about whether both of these vaccines, Pfizer and Moderna, may be in fact, entitled to emergency use authorization,” Collins said.

The two companies could receive EUAs by early to mid-December, he added.

“If these two vaccines do get approval, emergency use authorization, there will be about 40 million doses ready to be delivered in December,” he said.

People will need two doses of either vaccine. “So that’s 20 million people that can be immunized and we will need to make sure that is utilized for the highest risk people,” he said.

More doses will become available every month after that, Collins said, and there are other vaccine candidates that may also win approval.

“The hope would be that by April we really start to see a lot of people getting immunized and certainly by the summer we would hope to have most of America actually immune to this and we could start to think about getting back to life as normal,” Collins said.